Less and less Irish dairy exports destined for the EU

The volume of Irish dairy exports destined for the EU reduced last year while exports to countries outside the EU increased, according to DairyCo.

DairyCo says the shift appears to be well underway for SMP, with its exports to non-EU countries increasing by 10,400 tonnes (63%) in January to November 2014 compared to the same period in 2013.

It also says the proportions of Irish butter and cheese that leave the EU are much smaller but growing. According to DairyCo in the same period, butter exports to non-EU nations rose by around 3,100 tonnes (58%) and cheese increased by 5,100 tonnes (24%).

DairyCo says as part of this shift in Irish focus the UK has seen a decline in Irish imports. 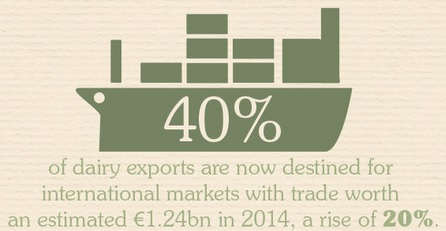 Butter imports fell by around 7,560 tonnes (23%) in January to October 2014 compared to the same months the previous year.

Irish Cheddar imports also reduced (falling 12%) over the same period, according to DairyCo but were partly offset by a rise in speciality cheese, resulting in an overall 3% fall in the volume of cheese entering the UK from Ireland.

According to DairyCo’s analysis, Ireland’s current trend towards non-EU markets is likely to continue as Irish processors have been investing in butter and powder facilities over recent years, although this trend will largely depend on the rate of growth in Irish production and future buyer demand.