Domestic milk intake was down 17.1% or a total of 28.1m litres in December, according to latest CSO data.

Domestic milk intake by creameries and pasteurisers was estimated at 136.7 million litres for December 2014. This was 17.1% below the corresponding 2013 figure.

This figure relates a downward production trend in with the country 7.15% and 6.51% over in October and November last respectively. But the December figure is significantly above the 1.63% over-quota position of this time last year.

Minister Coveney has said the downward trend in the over-quota figure is welcome as it reduces the exposure of dairy farmers to superlevy payments.

He also said that the monthly intake of milk in December suggests that dairy farmers are continuing to take the necessary on-farm measures to stay close to quota limits.

“I would encourage prudent management by farmers of their output in these final three months of the quota regime to help ensure that they enter the quota-free world with as little debt as possible. I am also continuing to work closely with other EU Ministers and with Commissioner Hogan to examine if measures can be taken at EU level to minimise the impact,” he said.

Comparing the December 2014 milk produce figures with those for December 2013 shows that total milk sold for human consumption decreased by 7.8% to 36.3 million litres while butter production was down 1.8% to 5,400 tonnes. 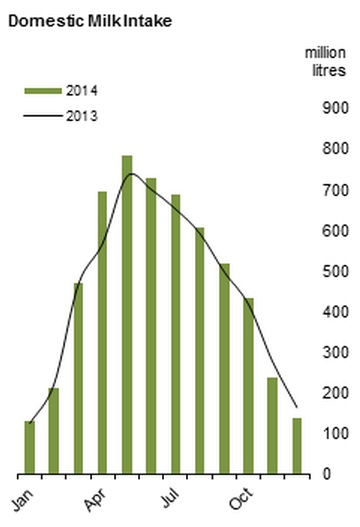