Met Éireann is predicting unsettled conditions in the coming days, while a Status Yellow low temperature warning is in place for this morning, Monday, November 18, until 10:00am.

The warning – in place for all counties except Dublin, Wicklow, Wexford and Waterford – is due to frost and patches of freezing fog, which is making driving conditions difficult this morning. Following that, the day will become largely dry and sunny, though reaming cold, with highest temperatures of 6° to 9° – though these will be lower where fog lingers in the afternoon.

Light variable winds will back south-easterly later in the day, and will freshen along Atlantic coasts.

Tonight, cloud will thicken from the west, with rain on the west coast overnight, spreading east into Connacht and west Munster. Lowest temperatures will be between plus 1° and plus 4° in a light to moderate south-west wind, with the north of the country seeing the coolest values.

Tomorrow, Tuesday, November 19, will see outbreaks of rain, which will move east over the country, arriving in the east in the early evening. Mainly dry and sunny weather will follow in the west.

The highest temperatures tomorrow will be between 7° and 11°, with moderate south-east winds. These winds will be fresh in the north, which will veer southerly for a time.

Tomorrow night will see further outbreaks of rain in the east and south-east, which will turn heavy at times. There will also be a risk of snow on the Wicklow Mountains.

Looking at Wednesday, November 20, the unsettled weather will continue, with a moderate to fresh south-east wind becoming strong on the coasts. Temperatures will be between 8° and 10°, with rain or showers at times.

Thursday, November 21, will see largely similar conditions, with temperatures still on the low side. Looking at Friday, November 22, and beyond, winds are expected to lighten, though rain will become more persistent in the south and east.

A spell of rain on Tuesday is likely to bring all soils to saturation, with poorly drained soils becoming waterlogged. Recovery is unlikely in the coming days as rain is set to continue. 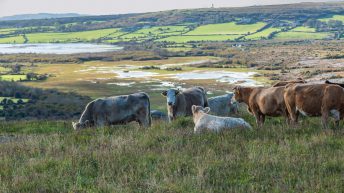 Cooney blasts RTÉ’s portrayal of farming as the ‘climate villain’