55% of sheep farmers work full-time on the farm – IFAC

Much like beef, profits are low in the sheep sector, and farmers rely on EU subsidies to support farming income. However, Irish lamb prices have increased steadily over the last couple of years; they were up by 6% last year.

These were just some of the findings that were discussed at the launch of IFAC’s Irish Farm Report 2019 – authored by Philip O’Connor – in Co. Laois today, June 20. The report details the views of over 2,133 Irish farmers and contains a comprehensive analysis of 21,755 sets of farm accounts over four years.

He explained: “60% of farmers with an off-farm income indicate that more than 40% of their household income is from non-farm sources.

Those gathered for the launch also heard that most Irish flocks are small – averaging 102 sheep – when compared with those in Scotland where the average flock is 200, or New Zealand where it is 1,400.

Mid-season lowland lamb is the main system of production and the launch heard that 60% of participants in the survey have a beef or tillage enterprise in addition to their sheep business.

The price for Irish lamb has steadily increased over recent years. It was up 6%, on average, in 2018 when compared to 2017.

O’Connor continued: “60% of our total exports go to the UK and France. However, New Zealand and Australia account for 70% of lamb exports globally; this has remained fairly consistent since the 1990s.

There are 33,313 flock owners in Ireland with an average of 102 sheep per flock. Donegal, Mayo, Galway and Kerry are the top four counties in terms of sheep population.

Meanwhile, over the last four years the total turnover in the sector has increased by 5%. 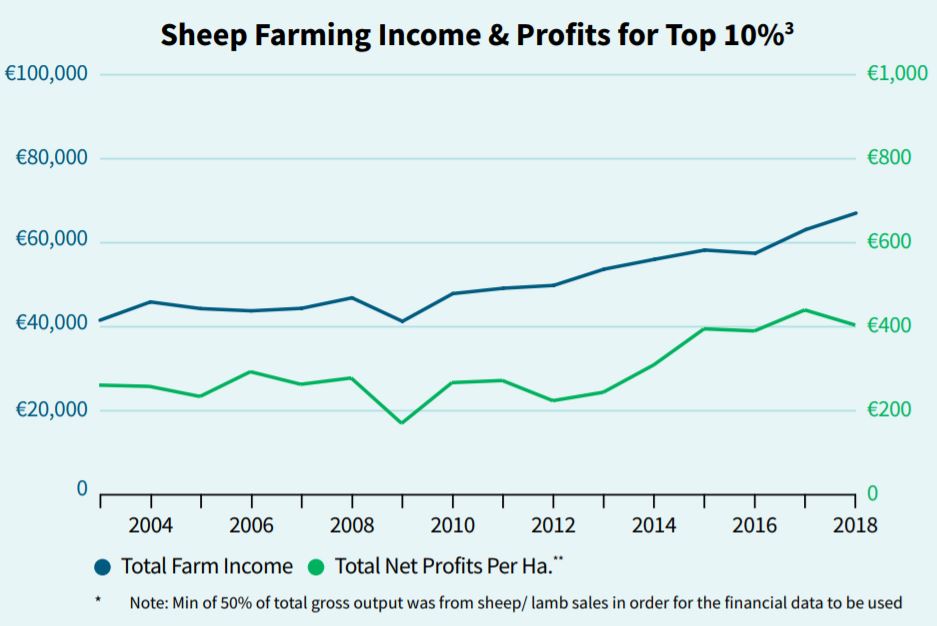