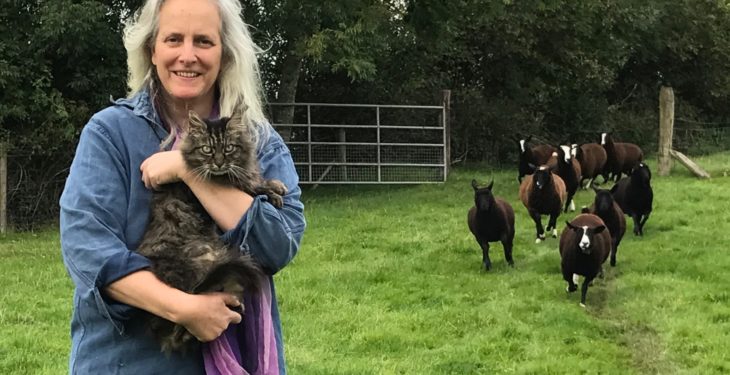 Meet the Kilkenny cat with a difference – a rescue with a memorable name – Bodacious – the shepherd feline that has helped secure a book deal for his social media savvy farmer owner.

Suzanna Crampton, who farms 50ac outside Bennettsbridge, signed the deal with HarperCollins which bought world rights to the book about a ‘shepherd cat’  that joined a sheep farm. ‘Bodacious: The Shepherd Cat’ will be published by HarperNonFiction on June 14, 2018.

The now famous feline appeared in Crampton’s life after she found him wandering around a shop in Kilkenny. “A friend told me he needed to be rescued so I picked him up and decided to hold onto him until he was reclaimed,” said Crampton.

When he was left unclaimed, she took him back to join the menagerie of other animals on her Zwartbles sheep farm. The book is told from Bodacious’ perspective, taking readers through a year on the farm, and highlighting his deep bond with Crampton.

I gave him that name after I went out to the stables to lead out two Irish draught horses. He wouldn’t leave me at any stage, so he walked in between the two horses behind me. I told him he was bodacious which is Louisiana Cajun slang for bold, beautiful and bolshie. He follows me around like a dog.

A HarperCollins spokesperson praised the book’s characterisation, humour, observation and plucky attitude. ‘Bodacious’, she said, reveals the inner workings of the Zwartbles farm, and recreates the atmosphere of the house, the orchards and the fields.

“The farm has been in our family for seven generations. My mother still owns the land but has never farmed it. My grandfather was a writer and market gardener more so than a farmer, so turned some fields into orchards and rented the bigger fields.”

Crampton’s agriculture education was in Vermont in the US. She also studied forestry and wildlife management. “I did my lambing apprenticeship on two different farms here in Ireland, in Wicklow and Carlow, in the early 1980s but soon after, left to work in New York, London and south-east Asia.”

She returned to Ireland in 1997, the year after her grandmother died. “I have taken over part of the farm, and am managing the rest for my mother,” Crampton said.

She has made her mark on social media thanks to her Zwartbles sheep. “I started out with Suffolk Texel X sheep but a friend and neighbour told me I was at nothing with a commercial flock, because I didn’t have enough land to make a sustainable living from them.

He suggested that I either go high-end pedigree or rare breed. Having come back from travelling, I didn’t have two farthings to rub together – I had started teaching photography – so I went for Zwartbles.

“I went to the National Ploughing Championships when they were held just up the road in 2008 at Burnchurch, and spotted these unique chic-looking sheep. I bought three hoggets and one pregnant ewe from Ray Sweeney from Ardee. As luck would have it, two of the hoggets happened to be in lamb, so doubled my flock at half the price in no time,” Crampton said.

“Zwartbles wool is a soft rich dark chocolate brown, with sun-bleached creamy tips. I loved it and showed it to a fine art felting friend, Caroline Scofield, who also loved it, but she was put off by cleaning out all the natural lanolin from their fleece,” she said.

Walking through Kilkenny city one day, she met arts officer, Mary Butler. “She told me about this group of ladies who were loving the knitting project of upcycling that they were doing in the [Kilkenny] Arts Office that month. They all wanted to do something similar again. I suggested she think of doing something from sheep to finished product, and she could use my beautiful sheep.

“Mary joined forces with another community group and they came up with a plan. The ladies would all come out to see the sheep, but also take part and learn to shear sheep, working on my growing flock of 15 Zwartbles. We had a local man, Andrew Forrestal, as well as the professional sheep shearer, George Graham, both of whom came and showed the women how to shear,” Crampton said.

The freshly-shorn wool was then taken to Cushendale Woollen Mills in Graiguenamanagh. This was my introduction to the woollen mill – I didn’t know it existed so close by. This is where the wool was cleaned and carded into lengths of roving.

“The ladies then wet-felted and dry-felted it, making felt pillow covers that were exhibited at the 2011 Shearing Championships at Cillen Hill. It was a great experience and my aim was to continue to produce something from this wonderful natural dark rich fibre,” Crampton said.

Philip Cushen of Cushendale Woollen Mills allowed the Kilkenny Arts Office wool project to use his mill for 15 fleeces. “I asked him how much wool he would need to make a product. He said half a ton of wool was as low as he could go. To find that amount of pure-bred Zwartbles wool was not easy. I had help from the Northern Ireland branch of the Zwartbles Sheep Association, and from Ray Sweeney, who put me in touch with many breeders.

“I crossed the length and breadth of Ireland, north and south, to collect Zwartbles wool. The next challenge was to get the sheep owners to respect the wool, and shear it with little or no straw or dirt in it. In Cushendale, all the wool is handled and picked through by hand, so the dirtier the wool, the slower the work. A fleece full of vegetable matter, straw and dirt tends to be tossed aside as a waste of time and useless,” Crampton said.

In her first year, she collected over 700lb of wool, from 11 flocks of registered Zwartbles sheep from throughout the country. “Sadly one fifth of the wool had to be tossed aside due to dirty wool, which left me with half a ton, the minimum weight needed.”

With help from Philip Cushen and his staff, she started producing a limited number of traditional-weight queen-sized Zwartbles bed blankets as well as traditional travel rugs. She also began producing knitting yarn.

The Zwartbles blankets were selected for the Craft Council of Ireland exhibition at the London Design Festival 2013. Within three months, President Michael D. Higgins chose them to give as diplomatic gifts which brought the collection to further attention.

Crampton tries to upload something everyday onto the Facebook and Twitter accounts. She currently has over 14,600 followers on Twitter and the Zwartbles Ireland Facebook page has over 2,500 followers. Followers are from around the globe, including: Japan; the US; Canada; Argentina; South Africa; and Kuwait, as well as knitters and spinners from the Zwartbles’ homeland in the Netherlands.

I played host to a group of six women sheep farmers who came from Norway to visit my flock, having seen them on Facebook.

Other tour groups come to see the sheep as well as buy the yarn and blankets. She continues to produce new products, both from woven fabric and knitted patterns. “All the wool is from Irish registered Zwartbles breeders from across Ireland, north and south.”

When Bodacious joined the fray, he too took to social media as the cat shepherd or @1CatShepherd. An American farming magazine, The Modern Farmer, featured his exploits. He now has 11,900 followers on Twitter, sharing tales of farming life, the sheep and activities such as soil sampling.

Crampton availed of the opportunity to produce a calendar and postcards featuring her famous cat and sheep. Bodacious also has his own range of blankets.

The book, Crampton said, arose from a demand from children in general as well as those in hospitals and hospices and their parents, to know more about Bodacious. There was lots of interest this summer from literary agents; a bidding war and an advance which is divided into seven payments, allowing her to employ help on the farm.

Her writing schedule has seen her change her lambing to February/March.

If the interest in her first book is anything to go by, she is on course for a whole new writing career. An article on her forthcoming book was the seventh most read article in a journal published during the Frankfurt Book Fair.

“That’s life, you have to go with the flow,” said Crampton. ” My life has gone down many a strange road. I have to give this a lash and the great thing is that I get to keep farming.” 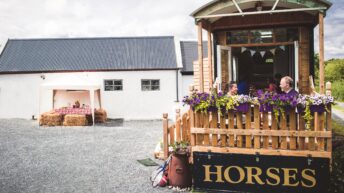