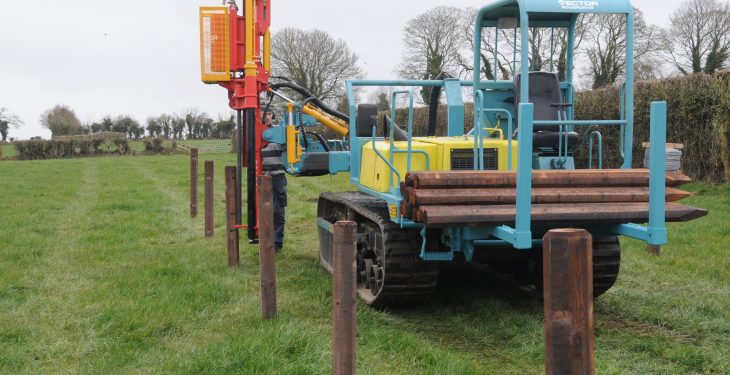 According to the manufacturers, this enables it to operate in the most difficult and challenging terrain with minimal surface damage.

It also says that the new post driver requires just one person to operate and the design allows the operator out of the machine when fencing, which is important on extreme terrain.

While fencing, the operator can ‘drive’ it from one post to the other and operate the post-driver all from one bank of hydraulic controls. All while safely standing beside the machine.

The Kilkenny-based firm also says that one of the most unique features of the Vector Powerdrive Model 8 is its hydraulically powered slewing arm.

The arm features a unique 2200 slewing angle, which makes the post driver an extremely versatile machine.

The slewing arm design makes it possible to drive fencing stakes or posts from either side of the tracked vehicle. In addition to the 2200 slewing angle, the post-driver can extend outwards telescopically.

Out at the business end of the post driver unit, the company says that the mast which carries the weighted hammer can be tilted left and right 300 degrees.

The post driver also features an integrated support jack and this helps to stabilise the machine when required.

Along with the stabilising jack, the post driver is equipped with a counterbalance weight of 600kg which is mounted at the opposite end of the post driver to improve stability.

The  Vector Powerdrive Model 8 also features a rock spike as standard, which the manufactures say can be used to bore holes in very hard conditions such as rock or concrete.

Vector Powerdrive can build the entire post-unit on a new or used donor vehicle, which it can supply or alternatively the customer can provide.

Outside of the fencing season or to increase versatility of the donor machine, the fencing unit can easily be removed and the dumper body re-fitted and vice versa, the manufacturers say.

The Vector Powerdrive Model 8 self-propelled post-driver has a retail price of between €40,000-€50,000 (depending on donor vehicle) + vat. 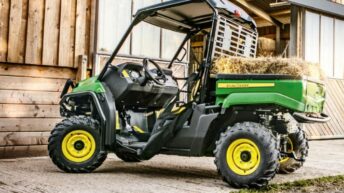 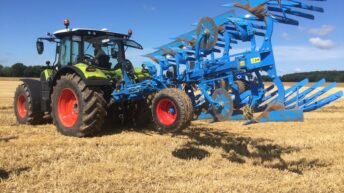 Looking for a new harrow or plough? – Check out the latest models from Lemken