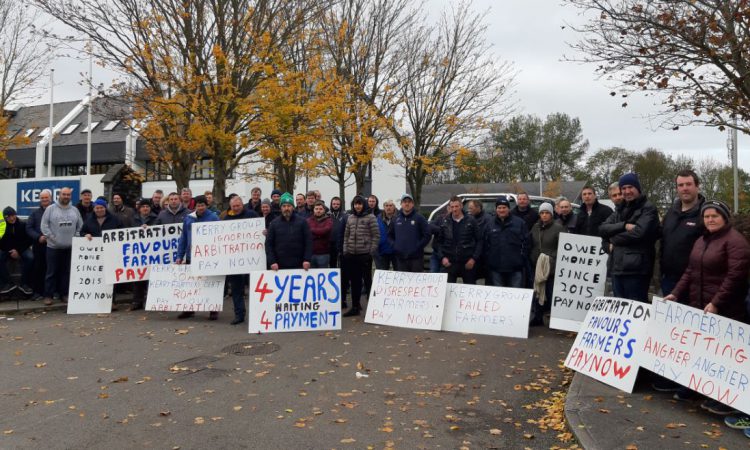 Protesters at the Kerry Group offices in Tralee have said that they will continue their action there, as fallout continues in relation to a dispute over milk price.

Jerome Crowley, a spokesperson for the protesting group, told AgriLand that the protesters are going to continue the campaign, and that they would “keep their ears close to the ground” in relation to ongoing developments between Kerry Group and Kerry Co-op.

The protest continued yesterday, Tuesday, November 5, with protesters claiming to AgriLand that between 60 and 90 demonstrators have been at the gates over the last 48 hours.

Commenting on the meeting that is scheduled for November 14 between representatives from the group and the co-op’s leading milk price committee, Crowley said it was “vital” that documentation be passed on to Kerry Co-op in advance of it.

We’re trying to grow our campaign gradually. We’re in the early stages. We have to box clever and consider all our options.

“Farmers are under pressure. We feel we are owed an awful lot of money,” Crowley said.

He added that the protesters will “not back down until we have serious engagement”.

Yesterday, also speaking to AgriLand, former director of corporate affairs for Kerry Group Frank Hayes argued that the group had been “in continuous communication” and “involved all along” with the co-op’s committee.

The protest stems from a dispute between the two parties over Kerry Group’s milk prices since 2015. Milk suppliers are arguing that they are owed money under a contract with the group.

Kerry Group has previously confirmed that it is conducting a review into its milk price for 2015 – which has so far indicated that there is “no adjustment required” to the 2015 price, the group argues.