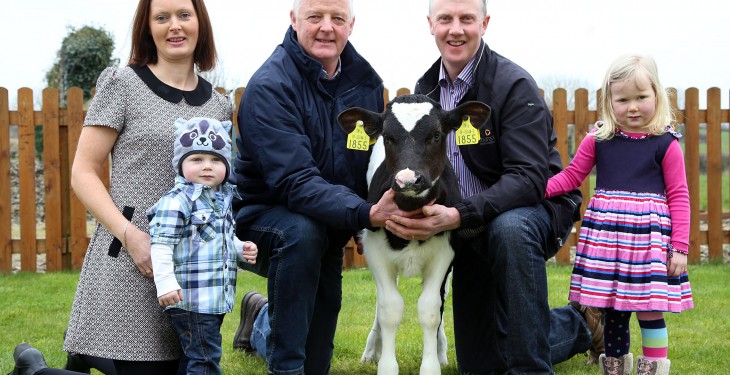 The first animal to hit 400 Economic Breeding Index (EBI) has be born. The bull calf was bred by Eoghan and Sinead McCarthy from Milltown, Co. Kerry.

The calf was born through National Cattle Breeding Centre (NCBC) and was sired by PSZ (IG) Lissane Pirate and from a LHZ (IG) Lauragh Evert daughter, one of the country’s leading daughter proven sires.

The bull calf was genomically tested by the NCBC breeding programme on behalf of Munster Cattle Breeding Group and Progressive Genetics.

A sister to the dam of the bull, by IRP Millands Prince, is one of the top cows at the Next Generation Herd in Moorepark, she produced over 7,000kg of milk at 4.40% butter fat and 3.80% protein, and she is also extremely fertile taking only three straws for her three calves born to date, the NCBC says.

It also says that the bull’s dam is a second calver predicted to produce over 6,000kg at 4% butterfat and 3.7% protein with excellent fertility.

The NCBC says the bull will be available through the GeneIreland Programme 2016.

This new milestone is in addition to Eoghan McCarthy’s selection as a ‘McDonalds Dairy Flagship Farmer’, one of only three farms in Europe. McCarthy was also runner-up in the ‘2003 Young Farmer of the Year’.