These cow boots were made for walking! 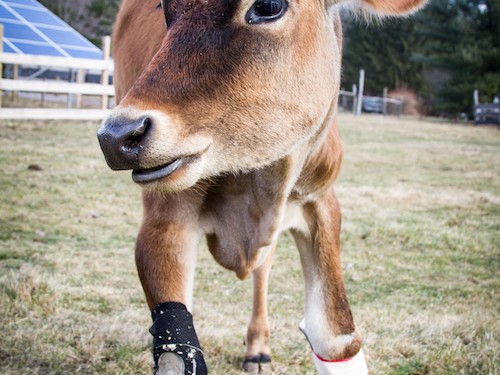 Fawn is a cow with a difference. The two-year-old Jersey cow has got prosthetic front legs after a farm accident left her with a damaged leg.

According to Woodstock Farm Animal Sanctuary, an American sancutary, when Fawn was born on an upstate New York farm she she fell into the concrete manure pit behind a row of cows who were being milked. The fall damaged her front knees, it says.

Fawn was discovered swollen and injured in the pit by the farm manager who called a local woman who had said she was interested in raising a pet cow, it says. The woman, Jennifer, brought the calf home, kept her inside the house and bottle-fed the calf.

The calf’s infected and fractured knee was not correctly treated by the vet therefore it didn’t fully heal, the sanctuary says. Fawn could then not support her increasing weight with her damaged leg and couldn’t stand properly, it says. A vet recommended having a neighbour come and shoot the calf.

That was when Jennifer contacted Woodstock Sanctuary for help, the sanctuary had the equipment and resources to bring the calf to experts at Cornell Veterinary Hospital and it says it expected the vets would tell them to euthanize the calf.

The opposite happened; to restore her ability to walk, they would operate on both front legs, not only repairing the damaged bone and knee but also the shortened ligaments in her other leg, the sanctuary says. Recovery would be slow and the cost substantial, it says.

The most recent news on Fawn is that she has been cast for permanent braces and that she is doing well.

Take a look at Fawn in the snow with her cow boots on.