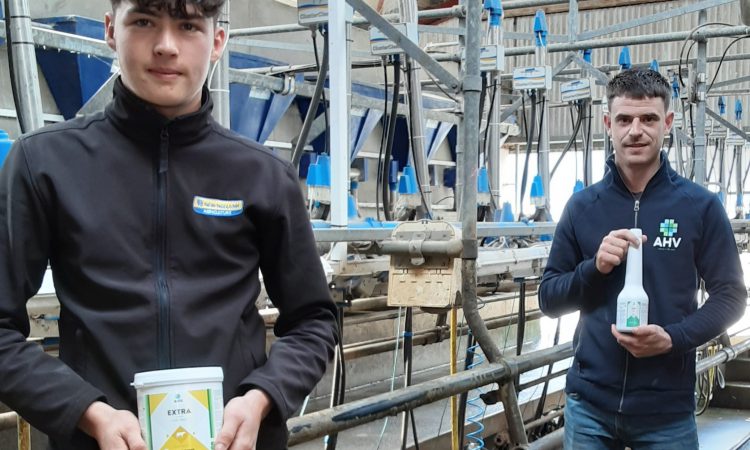 A Co. Kerry dairy farmer has managed to reduce his herd cell count figure by 50% in just four weeks. At the heart of this strategic management change has been the use of ‘AHV Extra’ tablets.

Getting to the bottom of a chronic cell count problem is one of the most perplexing challenges that can confront any milk producer.

It is a tale that has often been told on dairy farms the length and breadth of Ireland: the cows are producing well, butterfat and proteins are excellent, but cell counts are too high.

Such was the dilemma facing Mike Deenihan until recently. Farming on the outskirts of Lixnaw, near Listowel, he milks a herd of 145 spring-calving Friesian cows.

Getting to grips with the problem

“I am a third-generation dairy farmer,” Mike explained.

“Traditionally, we would have been milking 100 cows. However, the installation of improved milking facilities 10 years ago allowed us to increase cow numbers to where we are today.

“The cows start calving at the beginning of February with the season continuing through until the end of March. Our milk is supplied to Kerry Co-op.

The driving force behind the herd is to produce as much milk from grazed grass as possible.

“That side of the business has always worked well for me. And this year has been no exception,” he continued.

“The cows got the benefit of the warm, dry conditions during the spring months. The rain that followed means that we have oceans of grass now.”

Mike’s cows are currently producing 28L to 29L of milk per day with butterfats averaging 4.2% and proteins at 3.65%.

“Total bacteria counts (TBCs) have always been in the range of two to three with the thermoduric count consistently between eight and nine. However, a recurring cell count problem has been affecting the progress of the business for quite some time.

“It is one that would traditionally worsen as the cows passed the mid-point of their lactations. This year has been no different. Some weeks ago, the bulk cell count figure for the herd was in the region of 600,000.

“It was then that I decided to really get to grips with the problem.”

Mike had been aware of the work undertaken by members of the AHV team courtesy of reports in the press and discussions with neighbouring farmers. He contacted the company’s north Kerry sales consultant, Tommy Maunsell.

“The decision was taken to tackle the problem from two perspectives: identifying the source of the problem; then in tandem with this, tackling it,” Tommy explained. “Tremendous progress has been made on both fronts.

“Mike does not milk record. So, when it came to identifying the problem cows, the first job that had to be done was that of submitting individual milk samples from each animal.

“This work flagged up 27 cows with issues. Each was given an ‘AHV Extra’ tablet.”

According to Mike, the tablets were administered in a very straightforward manner.

“After about a week, the cell count of the affected cows started to fall significantly. The tablets were administered four weeks ago. During this period, the overall cell count figure for the herd has dropped to 300,000,” Mike said.

The expectation is that the cell count figure will continue to drop for the next four weeks. The additional benefit of using the Extra tablets is the fact that there is no withdrawal associated with their use and no tainting of the milk.

Mike concluded: “Working with the AHV team has allowed me to resolve a problem that had been causing me considerable stress for a significant period of time.

“The Extra tablets work. But they are not an instant fix. It takes a week to 10 days for them to have an impact. After that, the results speak for themselves.”

Tommy from AHV commented: “The problem cows were easy to identify once the samples results came through, but this is not ideal either. It is best to know the history of the cow over previous months and lactations to be able to identify the chronic cows.

“Chronic cows make the herd situation worse as they spread the problem and, in most cases, chronic cows need to be culled as the udder is beyond repair. Milk recording is highly recommended and is so beneficial in these cases.

“Cows with recent issues can come down to normal levels within 10-14 days, but in the majority of cases it takes four to eight weeks for cows to return to normal levels. Patience is required. In Mike’s case, he will see further reductions in the coming four weeks,” Tommy concluded.