Keeping pneumonia out of the calf house 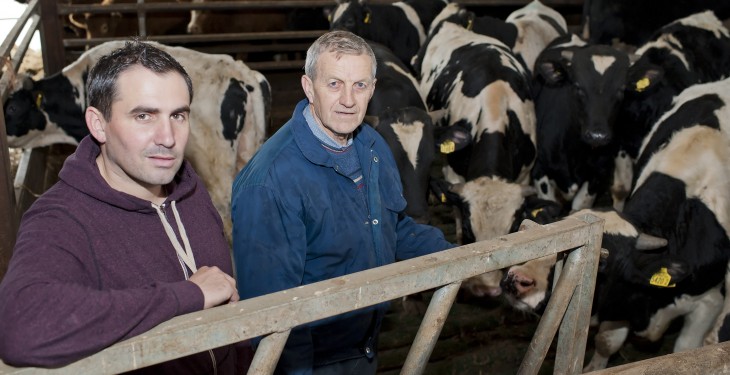 A spring calving suckler herd and a year round veal calf rearing enterprise are run by William Dick and his son Philip near Saintfield, Co. Down.

Apart from some heifer calves sold as replacements all their homebred suckler calves are taken through to finishing. On the veal production side of the farm business calves are purchased at 3 months of age and reared until slaughter at 11 months old. To help reduce the risk of disease spreading calves are bought in every month and kept in these batches right through the production system.

As Philip also has a full time off farm career it is vital that everything is kept running smoothly on the animal health front.

“We had more trouble with pneumonia than we would have liked 2 years ago’” explained Philip. “Since then, on the advice of our vets in Lisburn Veterinary Clinic, we vaccinated all the calves with Bovipast RSP and have had a lot less trouble and used a lot less antibiotics.”

Veal calves are vaccinated with Bovipast RSP on arrival at the farm and receive their second dose 4 weeks later. Bovilis IBR marker live can be given at the same time as Bovipast RSP, which gives protection against the common respiratory viruses and also against Mannheimia haemolytica (Pasteurella).

Suckler calves are vaccinated during the summer ensuring that the second shot of Bovipast RSP is given before housing. Cows and calves are housed in October with a creep gate allowing the calves access to a bedded area and concentrate feed. Weaning is less stressful on the calves due to their dependence on the dams being gradually weakened.

William and Philip have likewise been very proactive about controlling BVD on the farm which also benefits overall calf health.

Lisburn Veterinary Clinic carried out screening for BVD in order to identify and eliminate any BVD persistently infected, PI, animals on farm. Since then the farm has been participating in the NI BVD eradication programme, which identifies any persistently infected calves in the weeks after birth.

Cows are vaccinated pre-breeding with Bovilis BVD and Leptavoid H on the same day with heifers receiving 2 doses before breeding.

A cost effective animal health regime yielding dividends for William and Philip Dick now – and in the months and years to come.