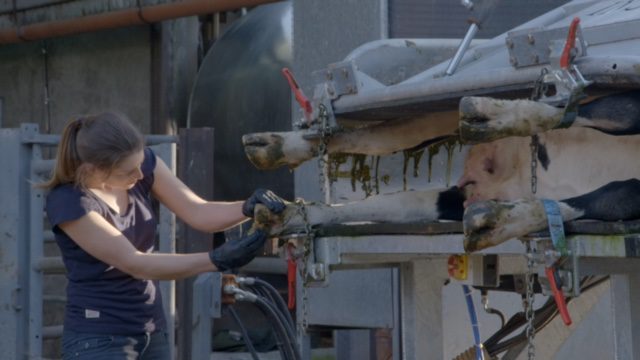 Co. Cork dairy farmer Maeve O’Keeffe thinks outside the box when it comes to hoof trimming and other issues. “That’s how the Inspect 4 rollover crate got developed,” she said.

O’Keeffe works on a 93ha family farm at Ballynoe, Conna, milking 135 cows. “We rear all our own replacements and sell surplus replacements as in-calf heifers,” she explained.

The farmer has made her mark with an invention, developed as a result of a working trip to New Zealand. She said: “As part of my college course, we had to do three months of work experience in New Zealand. As I was the only girl in my agri class, the lads encouraged me to go with them.

“Eight of us went. I worked on a 1,300-cow dairy farm in Canterbury, in the South Island. When the three months were up, my boss asked me to stay on, offering to pay for my flight back.

“I deferred college for a year and worked a total of 18 months on the farm. While working there, I learned many new skills – one included hoof trimming lame cows.

“Every morning, lame cows were drafted out and treated. It took two of us to restrain the cows in the upright crate in the mornings and it required a lot of physical work.

“One morning, we lost a cow in the crate when her back leg was hoisted up and she collapsed and choked in the front. I thought there must be an easier way that would be safer for the farmer and the cow,” O’Keeffe said.

“When I returned to the home farm, it was really bugging me that if a lame cow was spotted, she was left untreated for a few days until there were two or three lame cows together to justify the call-out charge for a hoof trimmer.

“I had learned how to hoof trim lame cows in New Zealand and wanted to treat our own cows. However, I felt the equipment available on the market was very dangerous and required physical work. I wanted to be able to treat lame cows on my own without any hesitation, as I knew the cows were in pain and the sooner they were treated, the better.”

Together with her father, Eddie, she looked at different options on how to restrain the cows safely, with minimal physical work. “We came across a YouTube video of a crate that turned a cow on its side in America. We thought it would be a fantastic way to restrain a cow, if it worked.

“We got out a measuring tape and measured the length and width of a cow in the yard one evening and started to build a crate that we could use to turn a cow on her side.

“The neighbours thought we were mad, and we also thought we had gone a bit crazy ourselves. However, the first night we put our first cow into the crate and turned her on her side, we couldn’t believe how quiet she was and how easy it was to treat all four feet.

“When other farmers saw it working, they encouraged us to develop it further and to even make a mobile version of it for hoof trimmers.

“We thought we would be out on the road, selling them in two or three months. However, it took a lot longer to develop them than we had planned. Nearly a year later, we had it developed with CE certification and patent pending ready for the market,” said O’Keeffe, a former secretary of the Irish Cattle Foot Trimmers’ Association.

“We have two different models; a fixed unit for famers and a mobile unit for hoof trimmers. We have a website, www.inspect4.eu, where farmers and hoof trimmers can see videos of the crates operating.

“We hold open days for live demonstrations on our home farm and we attend the National Ploughing Championships every year. As well as selling our Inspect 4 rollover crates, we have set up a mobile hoof trimming and heifer teat sealing service.

“We are covering Cork, Limerick, Clare, and more recently, Waterford, with our services. We have also set up a shop supplying farmers and hoof trimmers with glue, shoes, bandages and tools.”

Despite the innovation and her extensive experience, O’Keeffe said that on first impressions, some farmers don’t take her seriously until she starts talking. “Then they realise I actually am a farmer and know what I am taking about.

“Being the only female in my agricultural class was a bit daunting at the start but the lads were great,” O’Keeffe said.

“In my experience, in New Zealand, female farmers were on most farms. It was certainly not uncommon. Here in Ireland, being a female farmer is a little uncommon. However, I do think that more and more women are getting involved in farming, which is great.

I think women have a lot to offer to farming. With farm sizes increasing, and the use of modern technology, farming has changed.

“It makes it more suitable for women to get involved. It’s no longer about how strong you are, as there are machines now to do the heavy lifting.”

And when it comes to jobs that are more physical, they can lead to inspiring innovations such as the Inspect 4 rollover crate. 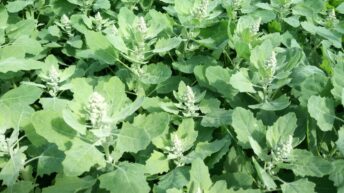