There has been a marked increase in the number of weanlings shipped out of Ireland by live export means this year.

Figures from the Department of Agriculture show that some 14,090 weanlings have been exported from Irish shores this year – an increase of 7,449 head or 112.2% on the corresponding period in 2016.

Much of this increase can be attributed to shipments to Turkey, as Turkish buyers have purchased just over 10,500 cattle from Ireland this year – the majority of which have been weanlings.

In addition, exports to Italy – a key buyer of muscled-type weanlings – have also increased this year. Official figures show that Italian buyers have acquired 14,289 Irish weanlings this year. This is a significant jump on the 13,080 exported during the same period in 2016.

Buyers for both of the above mentioned markets have been busy sourcing stock in livestock marts in recent weeks and this has added some much needed competition to the market. 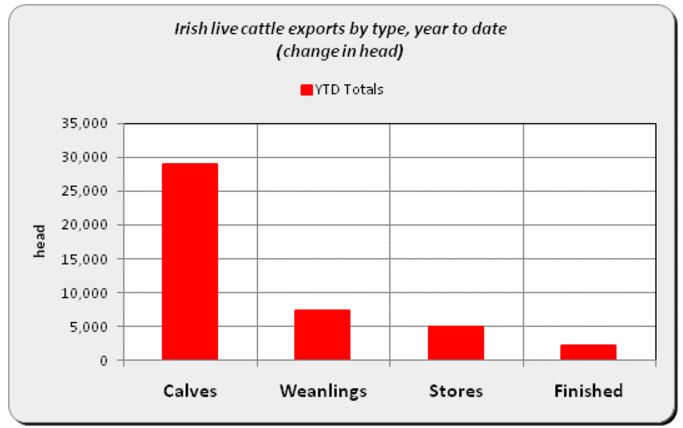 Furthermore, figures from the department also show that calf exports have also increased considerably this year.

Moving on to finished and store cattle exports, official figures show that there has been a 77.6% rise in the number of store cattle shipped from Ireland by live export means this year. Shipments of finished stock have climbed by just over 2,200 head or 17.5% on 2016 levels.

Speaking recently Angus Woods, of the Irish Farmers’ Association (IFA), said the clear message from last week’s Beef Forum was that beef markets are in a strong position and there is no basis for any pressure on cattle prices.

“Both Bord Bia and the factories confirmed the positive position on the beef markets and Minister Creed said live exports were performing very well, up 43% to date this year, which he described as very positive.”

The IFA National Livestock Chairman added that Bord Bia confirmed that the market for beef is strong and export market prices, particularly in the UK, are also very strong.

This comes due to increased live exports and lower carcass weights this year, he added.