Just over 1.27 million dairy births have been registered this year, according to the Irish Cattle Breeding Federation (ICBF). This is an increase of 43,477 or 3.5% on the corresponding period in 2016.

This increase can be largely attributed to the additional number of dairy cows being found on Irish farms.

Over the past six years dairy cow numbers have increased by 327,000 head. Much of this increase has occurred since the shackles of quotas were removed some 26-months-ago.

Moving on to beef registrations, a change appears to be happening at farm level as there has been a noticeable drop in the number of beef calves born on Irish farms.

The latest figures from the ICBF show that 707,021 beef calves have been registered on Irish farms so far this year. This is a marked drop on the number registered during the corresponding period in 2016. 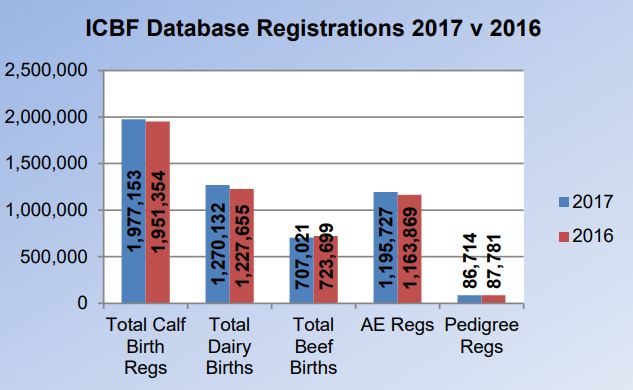 One of the reasons for this fall could have been the decline in the suckler herd; but it must be noted that it is still relatively early in the year and many more beef calvings will occur as the year progresses.

Figures from the Central Statistics Office (CSO) show that there were 11,200 fewer suckler cows in Ireland in December 2016 than in the same month in 2015.

Total calf registrations up by 25,799 head

When both dairy and beef calf registrations are considered, there has been a 25,799 head (+1.3%) increase in the total number of calves registered on Irish farms this year.