Pic: Trailer load of straw overturns at roundabout in Wexford 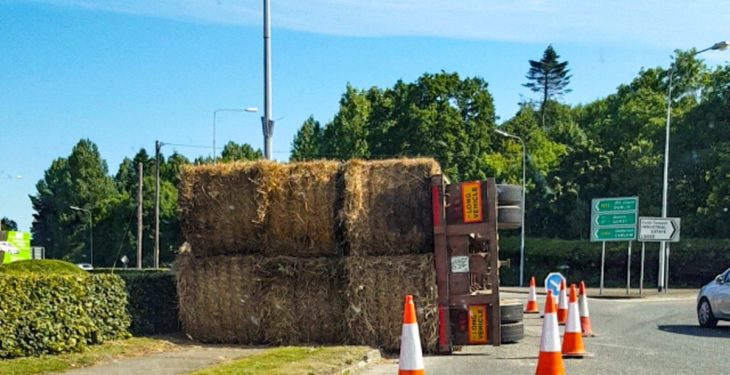 A trailer that was loaded with large square bales of straw overturned this morning, July 17, at a roundabout in Enniscorthy, Co. Wexford.

The details of how the trailer overturned are still unclear but it is believed that no other vehicle was involved in the incident.

The trailer, which was being towed by a blue tractor, forced members of An Garda Siochana to close off a section of the outside lane of the roundabout.

It overturned on a roundabout close to Donohue’s garage on the N11 northbound before 8:00am this morning, according to AA Roadwatch.

The tractor, which was towing the trailer, remained on all four wheels, but the trailer – which overturned on the main road connecting Wexford and Dublin – did disrupt some commuters on their way to work.

It is believed that it took a number of hours before the trailer and the bales were removed from the scene.

WEXFORD: Debris being cleared on N11 northbound at the roundabout at Donohoe’s Garage, Enniscorthy https://t.co/0bSXZ1R48T

Transporting bales on the road

According to the Road Safety Authority (RSA), if a farmer or contractor is driving a tractor transporting bales on a trailer, it is their responsibility to ensure that they are compliant with the national weight and dimension limits.

It is also their responsibility to ensure that they never exceed the manufacturer’s specifications and authorisation plates on such trailers will indicate the “maximum loads not to be exceeded in Ireland”.

When in use in a public place, every vehicle shall be such, and so maintained and used, that no danger is likely to be caused to any person, the RSA added.

Operators or drivers should employ a load restraint method suitable to the load being carried, the authority concluded. 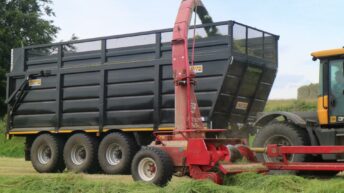