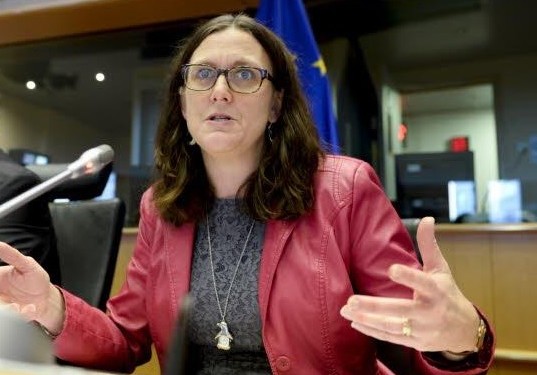 EU Commissioner Cecilia Malmström refused to rule beef out of a new trade deal between the EU and a host of South American countries.

It comes as Commissioner Hogan said this week that at South American beef would be ‘off the menu’ and would be withdrawn from the current negotiations with the Mercosur trading bloc.

However, in response to a questioning from a number of Irish MEP’s Commissioner Cecilia Malmström refused to confirm the announcement.

She said that Mercosur was a fantastic export market opportunity for the EU with a population totalling 250m people. She added that there were huge opportunities for European business including agriculture.

Malmström said she was aware of the crisis in the agriculture sector at present but highlighted the potential for the Mercosur deal to reduce feed costs across Europe by removing import tariffs.

However, she refused to rule in or out ‘beef’ from the negotiations which are taking place this week.

Speaking afterwards, Irish MEP Marian Harkin said she expressed grave concerns to the Commissioner about the impact of any concessions in the sensitive beef sector.

Speaking in the Parliament Marian Harkin stated that “one of the main issues is that farmers in the EU are not on a level playing field with South American farmers when it comes to EU standards on the environment, food safety, food traceability, consumer protection and animal welfare standards.

“These standards impose significant costs on EU farmers. It has been estimated that costs could exceed €200 per head. Therefore, any move on granting tariff-free access to South American beef has the potential to hugely damage beef production in Europe and in Ireland.

Mairead McGuinness also spoke in the debate and said that the EU’s proposed opening offer on agriculture seemed ‘extremely’ generous and questioned the logic behind the decision.

Meanwhile, Luke Ming Flanagan also highlighted the damage the deal could have on the Irish agriculture. He said its impact could hit Irish Agriculture to the tune of €500m.

Munster MEP Sean Kelly also spoke and he stressed to the Commissioner that the EU should look after its agriculture sector first before engaging in possibly damaging trade deals.