Over 30% of farmers in some EU countries are reported as feeling demotivated because of “agri-bashing”, according to a new farmer survey conducted across Europe.

With the key focus of “does ‘agri-bashing’ impact farmers’ moods?” the EU Farmers’ Confidence Barometer conducted an initial survey to assess the reality of this concept, according to EU farmer representative association Copa-Cogeca.

The first results showed that French and German farmers felt the most criticised while Italy and Hungary seemed less affected by this trend.

In both France and Germany, over 30% of farmers reported that this criticism had a clear impact on their motivation to continue farming, the study found.

While the concept of “agri-bashing” is on the rise in the media across various EU member states, the precise definition remains elusive, the EU farm lobby group noted.

The definition of “agri-bashing” varies from one country to another. The survey – carried out by Copa-Cogeca within the scope of its Confidence Barometer – aimed at understanding where farmers felt the majority of unfair criticism was coming from (be this from traditional sources or social media) and the impact it had on their motivation to continue farming.

As part of the semestrial Farmers’ Confidence Barometer, Copa-Cogeca ran a survey among 2,500 farmers from four different EU countries in order to see whether they perceived themselves as being criticised for their farming practices during the first quarter of 2020.

The four countries included were Italy, Hungary, France and Germany. 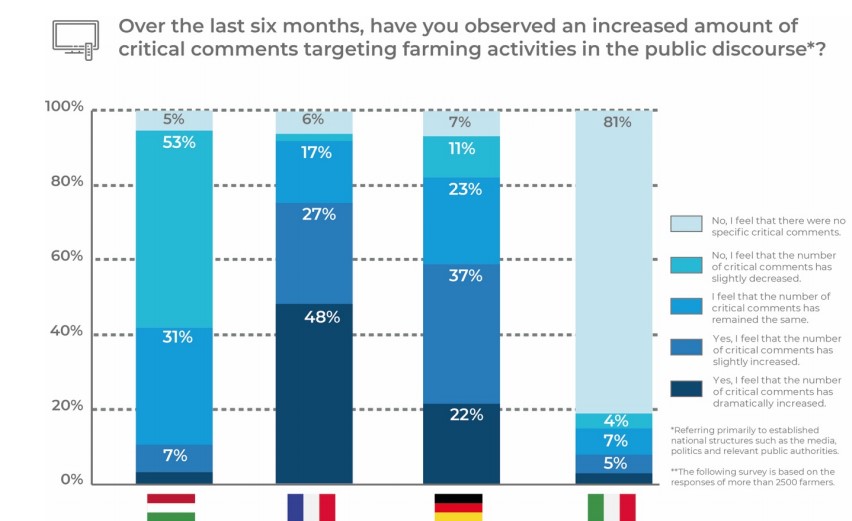 The results varied depending on the country. France was affected the most, with farmers reporting an increased amount of critical comments concerning farming activities in the public discourse.

75% of French farmers agreed that their farming practices had been criticised and 48% suggested that the number of critical comments had dramatically increased in comparison to the previous quarters.

Germany came second with 59% of farmers believing that their practices had been criticised, while in Hungary (38%) and Italy (12%) criticism in public discourse proved to have a lesser impact.

On whether farmers had been directly criticised (mainly through social media) for their farming practices, France was number one again with 26% agreeing with this statement, followed by Germany with 14% and Hungary with 6%.

Finally, when asked whether the criticism that they may have encountered, either directly or through public discourse, had dampened their motivation to continue farming, a surprising 12% of Italian farmers agreed that it had, despite their low criticism percentage. 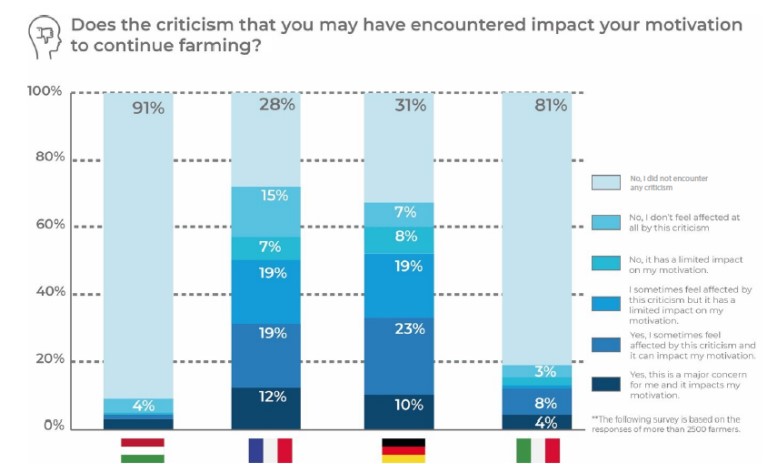 France’s high criticism percentage meant that for 31% of French farmers their motivation is directly affected by this criticism.

In Germany, an even higher percentage of farmers felt their motivation had been impacted, with 33% of them agreeing that public and direct criticism affected them.

This overall outcome could imply further underlying issues and socio-economic impacts as far as farmers’ motivation is concerned, as the extent of the criticism in each country does not appear to directly correlate with farmers’ motivation, the study concluded.