‘Irrationality of the British government’ frustrating in Brexit talks – MacManus

Sinn Féin MEP Chris MacManus has said that the “irrationality of who we’re dealing with in terms of the British government” has been “frustrating for Ireland and the wider EU”.

MacManus has reacted to comments made by the EU’s chief negotiator Michel Barnier, who said that a trade deal is “unlikely” following the latest round of Brexit talks in London.

‘Driven by appealing to middle England’

MacManus said to EuroParlRadio on Friday last, July 24: “I think the EU has been continually prepared to meet the British halfway.

To some extent, what’s been frustrating for both us here in Ireland and the wider EU is at times, the irrationality of who we’re dealing with in terms of the British government.

“There seems to be a lack of consistency. They [members of UK government] seem to be more driven by appealing to ‘middle England’, that kind of political audience.

“It would just leave one scratching their head about how realistic these people are.”

‘Government not doing enough for agriculture’

MacManus added that he has found from talking to people involved in small and medium-sized enterprises and agriculture that “they’re not hearing enough from the [Irish] government in regards to what we will do in the possibility of a no-deal”.

We are looking at a stronger possibility of a no-deal Brexit.

“We need to hear the government beginning to articulate a preparedness. There needs to be a parallel discussion and hopefully there will be some form of a deal – not this skinny deal, but a full deal.”

‘There has been no movement on those issues’

MEP Mairead McGuinness has also expressed concerns over the prospect of a no-deal Brexit for Ireland.

After the latest round of Brexit talks, Barnier said that Britain’s refusal to commit to “the conditions of open and fair competition” along with “an equitable agreement on fisheries” was slowing down progress of the negotiations.

There has been no movement on those very specific issues and they were always the ones that were going to cause trouble.

“We need to prepare for the possible reality of a no-deal Brexit.” 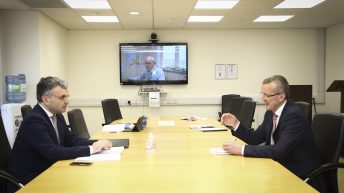