Irish milk powder volumes in intervention to rise, unless markets pick up

The volume of skim milk power (SMP) that Ireland is putting into EU intervention looks set to rise.

According to statistics from the Milk Market Observatory, Ireland offered 170t of Skimmed Milk Powder to EU public intervention in the week ending January 10.

According to a spokesperson for Ornua, the recent offering by Ireland is due to a post-holiday factor.

“Part of the increase will be the post-holiday factor – people back at work. Recent Irish volumes have been modest, but we do expect this to rise unless there is increased market activity.”

However, according to Catherine Lascurettes, Executive Secretary of the IFA Dairy Committee, the increase in SMP going into intervention is reflective of the pressure markets globally.

She said it is without doubt that the production of skimmed milk powder has been high over the past year and that dairy market sentiment has taken a hit in recent weeks.

In mid to late November last year the talk was of a rebalancing of the supply and demand dynamic and there was some sense of positivity returning to the market.

“However, more recently there has been a very different tone to the sentiment coming from those in the market place. Market sentiment in recent weeks has disimproved.”

She also warned that milk production in the EU has continued be high – much greater than had been expected. 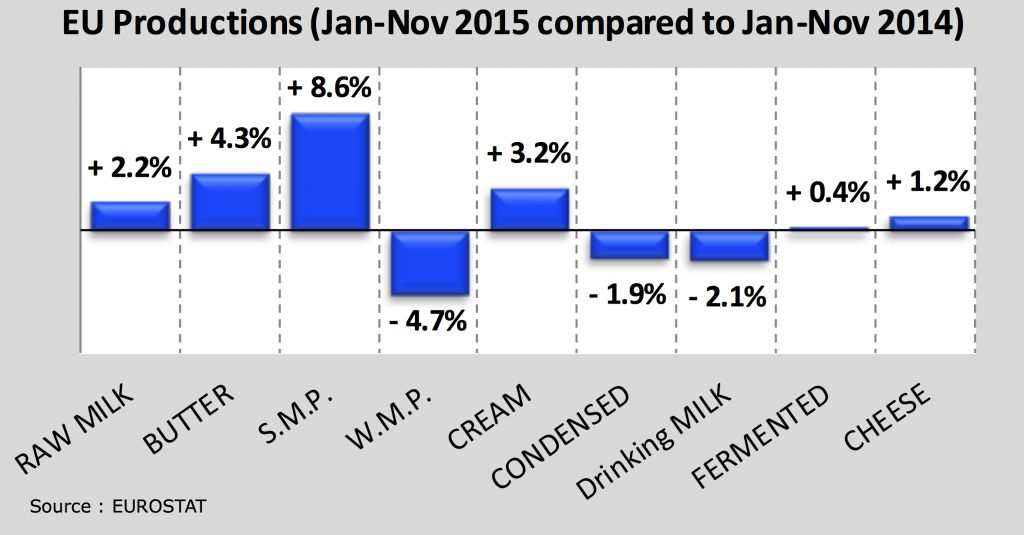 Since it first used the mechanism in September of 2015 Ireland has now offered over 2,000t of Skimmed Milk Powder to public intervention.

The most recent week saw the highest amount of product offered to public intervention in the last 12 months (6,300t). Offer quantities were also high in the latter weeks of December 2015 with in excess of 3,000t a week also offered.