Irish heifer prices the fifth highest in the EU

Irish heifer prices are the fifth highest in the EU, according to the latest figures from the Livestock and Meat Commission (LMC).

In the week ending May 14, farmers in the Republic of Ireland were being paid 411.1c/kg for an R3-grade heifer.

This represented an increase of 8.6c/kg from the 402.4c/kg paid in the corresponding week during the month of April.

Farmers in Northern Ireland received a price of 424c/kg at the end of the second week in May, an 11.9c/kg jump from the price paid in the week ending April 16.

This meant that the North/south price differential stood at 12.9c/kg in the week ending May 14, figures from the LMC show. On a 280kg heifer carcass, that price gap equates to a difference of €36.12.

In mid-May, the difference between the R3-grade heifer price paid in Northern Ireland and the EU average amounted to 35.5c/kg; this had widened by 6.1c/kg in the space of four weeks. 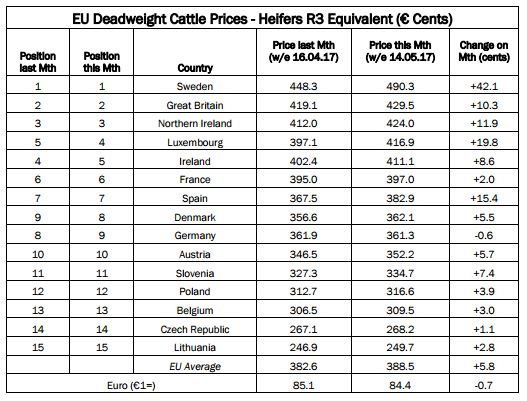 Meanwhile, the price paid to farmers in the Republic of Ireland stood at 22.6c/kg above the EU average in the week ending May 14.

Across the Irish sea, British farmers were paid 429.5c/kg for an R3-grade heifer at the end of the second week in May; this put it in second place in the EU heifer price league table.

Between April 16 and May 14 the price paid to British farmers increased by 10.3c/kg.

The differential between the R3 heifer price in Britain and the EU average widened from 36.5c/kg in the week ending April 16, to 41c/kg at the end of the second week of May, LMC figures show.

British farmers were paid 5.5c/kg more than their counterparts in Northern Ireland in mid-May, which equated to a difference of €15.40 on a 280kg carcass.

Meanwhile, farmers in the Republic of Ireland were paid 12.9c/kg less than their British counterparts in the week ending May 14; this amounted to a difference of €51.52 on a similar-sized carcass.