Irish heifer prices continue to rise, as the North and Britain report falls

R3 grade heifer prices in the Republic of Ireland increased in the week ending January 22, figures from the Livestock and Meat Commission (LMC) show.

While Irish prices increased, a fall in heifer prices was reported in both Northern Ireland and Britain, when compared with prices from four weeks ago.

Farmers in the Republic received on average 384c/kg for an R3 grade heifer at the end of the third week in January, an increase of 5.5c/kg in the space of a month.

This increase placed it 1.5c/kg above the EU average price and 19.4c/kg lower than the equivalent price in the North, in a week when the euro was worth 86.9p.

At the end of the third week in January farmers in the Republic of Ireland were being paid €54.32 less than farmers in the North for a 280kg R3 grade heifer carcass.

In the same week, the Republic of Ireland remained in eight position in the EU heifer price league table, while the North dropped from third to fourth.

In the week ending January 22 the average R3 grade heifer price in the EU was 382.5c/kg, which represented an increase of 4.4c/kg compared to the corresponding week in December, according to the LMC. 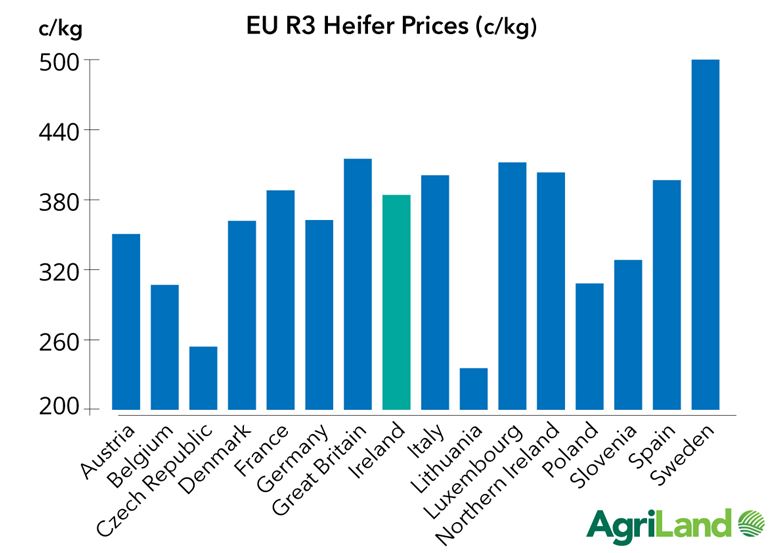 Figures sourced from the LMC.

The latest figures from the LMC show that the R3 heifer price in the North decreased by 15.1c/kg in the week ending January 22, leaving the price at 403.4c/kg.

British prices remained in second place in the EU league table at the end of the third week in January, with an equivalent R3 heifer price of 415c/kg.

This was a 10.1c/kg decrease from the 425.1c/kg paid during the week ending on Christmas day, figures show.

In the space of four weeks, the price difference between the British and EU average price also narrowed from 47c/kg to 32.5c/kg.

In the week ending January 22, British farmers could expect to be paid €88.80 and €32.48 more for a 280kg R3 grade heifer carcass than farmers in the Republic of Ireland and Northern Ireland, respectively.

'Marts the number one venue for cattle sales in Ireland'