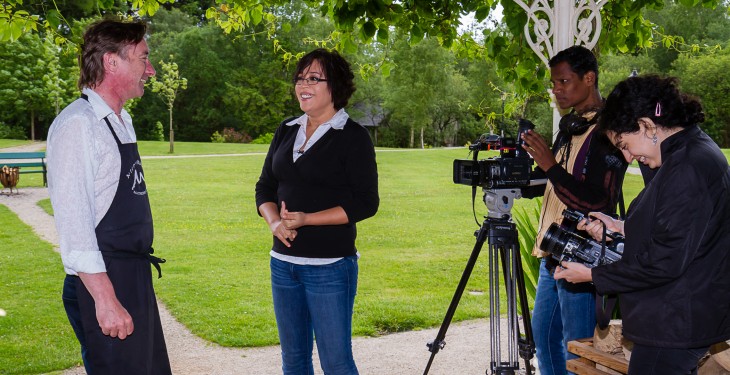 A TV crew from NDTV 24×7 travelled here over the weekend, to capture footage at various locations for the award-winning show. They visited BrookLodge and Macreddin Village in Co Wicklow, where they filmed scenes at The Strawberry Tree restaurant – the only certified organic restaurant in Ireland – and interviewed top chef Evan Doyle.

Their itinerary also included a visit to the Baileys Farm in Tinahely. Then it was on to Dublin, where they filmed the “Art Tea” at the Merrion Hotel, as well as music and dancing at the Irish House Party on Francis Street and the making of Boxty at Gallagher’s Boxty House in Temple Bar.

In the west of Ireland, they will visit the famous Morans Oyster Cottage near Kilcolgan and Ard Bia at Nimmos restaurant in Galway city. They will also film a baking demo at Bunratty Folk Park in Co Clare.

Tourism Ireland India Huzan Fraser said: “We are delighted that NDTV chose to film in Ireland. It is a wonderful opportunity to showcase our world-class cuisine and some of the many things to see and do in Ireland to a huge audience of potential holidaymakers around India. Television and film are recognised as strong influencers for prospective holidaymakers and Tourism Ireland regularly works with TV and production companies around the world, to facilitate the making of travel and lifestyle programmes and films around the island of Ireland. The publicity value of a TV programme such as this is incalculable – it is a really great way of promoting Ireland in India, helping to inspire travellers to come and experience the destination for themselves.”