It was the purchase of 30 cows from Ireland, in April 2013, which really started dairy farming siblings Ian and Lucy Mansell, from Shropshire, thinking about the way forward for their business.

Back in 2013 they bought in 15 cows and heifers from Ireland and found really good value in Ireland. The introduction of the Irish stock proved so successful that the Mansells decided to change their business plan completely and, in January of this year, they went back to Ireland to purchase some 115 heifers.

In a whistle-stop tour over two days the Mansells visited and purchased stock from seven or eight farms in Enniscorthy, Fermoy and the general Cork area.

In the summer of 2013, the Mansell’s herd at Brookhouse Farm, 300 acres near Oswestry, had developed into a 170-strong herd, milking three times-a-day, with an average yield of 10,500 litres per cow, on 3.6t conc./cow. With only Ian and Lucy, and some part-time help from a relief milker working on the farm, it felt as if it had become a non-stop battle with fertility, mastitis and lameness issues.

“It was an incredibly complicated system,” says Ian. “All we had was wagon after wagon coming into the yard delivering things we’d had to buy to keep the system going. We were either milking, or feeding, or scraping out, we had no time for developing the business. We were tired, the cows were tired and the farm was tired.

“Fundamentally, it was not a profitable system for us, and we knew we were looking at a high level of investment just to keep it going as it was, something had to change,” he explains.

It was the arrival of the Irish cows and a conversation with their DairyCo extension officer, Hugh Black, that really got them thinking about moving to a low input grass-based system. The pair had met Hugh at DairyCo events and local discussion groups, and contacted him with their idea.

“Hugh came over and walked the farm with us, discussing our ideas and options, and really helped open our eyes to the possibilities. He explained that the layout of the farm and the existing network of cow tracks lent themselves to a grassland system. We talked about creating paddocks and providing the cows with water at grass.”

“The Irish cattle, all in their first or second lactation, joined our high-yielding Holstein Friesian cows, and straightaway you could see they were almost a different animal,” explains Lucy Mansell.

“They didn’t seem to go lame, they had few mastitis problems and, most tellingly, they would bypass the buffer feed to get out to the grass. We realised we’d bred our Holsteins to go straight to the feed barrier. They used the grass as little more than a soft lying surface and this had become the norm for us.” 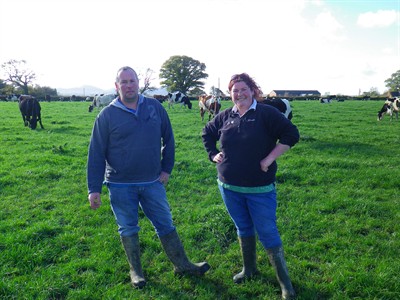 One thing Hugh did impress upon Ian and Lucy was the need to talk to other farmers who milked under a grassland-based system, before they did anything else. The pair then visited, among others, Dave Lee in Powys (BGS President and Forage for Knowledge contributor) who, again, was instrumental in helping them make a decision.

“All the farmers and consultants we talked to as we investigated grassland systems were incredibly helpful and open with information. It was clear from the start that these were profit driven businesses, where the farmer was in control,” says Ian.

“We knew we could grow the grass this system needed. Historically, this had been a grazing unit, but we had got into this spiral of driving production at the cost of anything else. We’d lost focus. We made good silage and found ourselves making more and more of it, rather than getting the cows to graze it themselves.”

After working through the budgets closely with consultant Richard Snell, the siblings decided to move to a grassland-based system on December 6, 2013 and, by the beginning of January, Ian was in Ireland buying cows. About 45 of the existing herds’ cows were sold, and about 50 went as barren cows. The rest of the Holstein cows were then incorporated into the new herd. The 151 in-calf Irish heifers arrived at the beginning of January 2014 and began to calve in February.

Ian and Lucy sold much of the farm’s machinery, making huge savings in repair, insurance and fuel costs, to help improve the infrastructure, such as tracks, fencing and water provision. 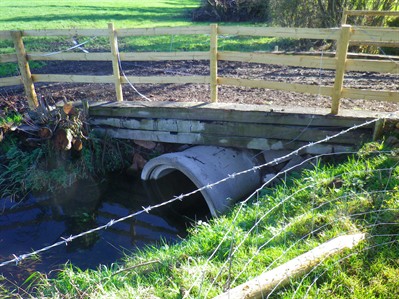 “We’ve saved over £2,000 on fuel for the feeder wagon alone,” says Ian. “Imagine that multiplied by all the machines we had running all day, every day. I’ve even sold the molasses tank to stop me being tempted to ever fill it up again!”

Ian and Lucy turned their attention to the grass, soil sampling the whole farm, and found that 85% of the farm came back low in P&K. Soil compaction was also an issue and Ian aerated two-thirds of the ground this spring.

With the help of Richard, Lucy and Ian laid out a rotational grazing plan for the farm. They use a web-based programme to help plan the coming week’s grazing, and both have learnt how to use a plate meter, admitting now to using it much like they previously used the scales on the feeder wagon.

“I reckon I walk about seven miles a week, measuring the grass with the plate meter,” says Lucy. “And I think it’s probably the seven most valuable miles of the week. It’s no coincidence that the one week we ran out of grass this summer was the week after we didn’t measure. I use information from DairyCo’s Forage for Knowledge grass analysis, and from the plate meter to know how much quality feed to put in front of the cows.”

Ian continues, “Premowing has been key for us this season. We are under-stocked, but are happy to be this first year in, when we’re learning so much, and it has helped us keep on top of residuals and quality. We did a stint of pre-mowed towards the end of May and again in August to keep on top of quality.

“We’ve used on/off grazing and multiple entry sites into paddock to protect grass and, although I know it has been a great year for grass, performance has been great.”

Ian and Lucy have continued building cow tracks this autumn and have another 2,500 sleepers on order. “It’s very limiting if you look at your farm from where the hedges and ditches are,” says Ian. “There might be more possibilities than you think.”

With this in mind, the pair spent about £1,000 putting a bridge over a ditch allowing access to far off grazing without damaging the grass that needed to be travelled across.

The Mansells now milk 225 cows, a mix of crossbreds and Holsteins from the original herd. Crossbreds get 700kg cake in the parlour, with the Holsteins getting about 1,200kg.

“Everything else they get from grazing,” says Lucy. “By this time last year, we’d have used a whole clamp of silage by now, how much would that have cost?”

Lucy and Ian admit their mindset did have to change. They have trained themselves not to look at milk in the tank but the profitability of the business.

“We are in control now,” says Ian. “We no longer have wagons rolling in all the time costing us money. We have the time and energy to think about and develop our business for the future. The other day, the vet greeted us with “Hello strangers!” I think that’s an indication of just how little we see him and how well this system is working for us, not the other way round.

This article first appeared on DairyCo’s website. DairyCo is DairyCo is a levy-funded, not-for-profit organisation working on behalf of Britain’s dairy farmers.