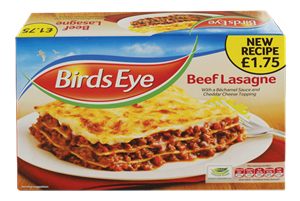 Frozen food giant Birds Eye is set to buy all its beef from UK and Irish farms as it sees its burger sales soar more than 70 per cent over the past year.

This new policy will be in place by July and all its other beef products – ready meals, pies and roast dinners – will follow by the end of the year.

The move comes as figures show Birds Eye burger sales have performed strongly in the past few months. Since mid-February, the company – which sells more than 100 million beef burgers a year in the UK and Ireland – has seen an 11.9 per cent jump in burger sales in a market that was down by more than a third (-34.4) per cent.

In the four weeks to the 11th of May, Birds Eye enjoyed a 72.8 per cent surge in a market down 1.5 per cent as people stocked up for the BBQ season.

Birds Eye beef burgers have predominantly been sourced from British and Irish farms in the past and stayed on-shelf throughout the horsemeat scandal. Last March the company identified Irish meat processor QK Meats as the source of horsemeat in three of its products.

Andy Weston-Webb, Managing Director of Birds Eye UK & Ireland, said: “Birds Eye is proud to announce its commitment to source 100 per cent of its beef from UK and Irish farms. Back in March, we introduced a new DNA testing regime into our beef supply chain which we believe is one of the best in the industry.

“Our commitment to use 100 per cent UK and Irish beef reinforces why consumers can trust Birds Eye. With the start of summer, consumers have every reason to put a Birds Eye beef burger on the BBQ – they taste great and the beef is from UK or Irish farms.”