Looking to Northern Ireland, the average R3 heifer price for the week ending October 25 was the equivalent of 439.5c/kg.

Britain remains on the top spot on the league table of heifer price. For the week ending October 25, 2015, it had an equivalent price of 480.5c/kg.

According to LMC figures, this was a decrease of 6.8c/kg compared to week ending September 27, when it was the equivalent of 487.3c/kg. 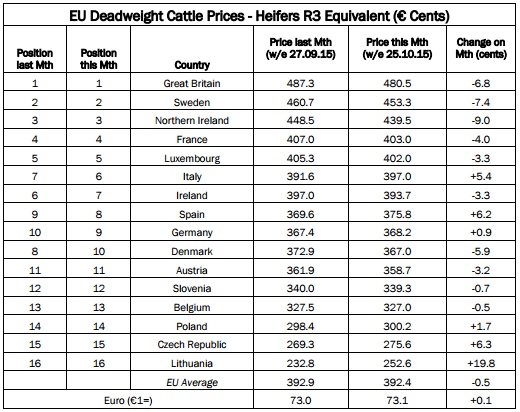 In the week beginning November 2 last year, the IFA staged the second of its beef crisis protests outside beef plants across the country over low prices.

At that time, the beef price hit a low of €3.50/kg in some plants, with increased supplies and weak European and UK demand blamed for the poor trade.

Beef factories came in for huge criticism at the time for a significant differential in beef prices between the UK and Ireland. At the time the IFA claimed the gap had widened to €350 per animal or €1/kg.

In general, beef prices are in the region of 6-8% higher than those received by farmers 12 months ago.

While it had been anticipated by many that reduced supplies this year would see beef prices significantly higher than those of 2014, beef prices have remained relatively steady on the back of weaker demand on the continent.