The maize silage harvest was wrapped up last week on one Tipperary farm and Barry Grogan from Tipperary was on site with his drone filming the action.

Pat and Darren (who is also the 2013 All-Ireland Hedgecutting Champion) Fahey are the two contractors harvesting the maize in the video.

The maize was cut on the Dunne family farm at Ballyduff, Thurles last week.

A John Deere 7700 forage harvester did all the hard work of cutting the maize.

Grogan filmed the harvest with a DJI P2V+ and a GoPro Hero 4 Black.

The footage shows the mild weather the country’s been having recently and it was a great day for filming.

Grogan said it took about 30 minutes to record altogether and the drone has a flight time of about 18 minutes.

There will be widespread rain this weekend – Met Eireann

There is widespread rain promised this weekend, with more wet and windy weather next week, according to Met Eireann.

On Saturday, it said that widespread rain during the morning will gradually ease and clear to scattered showers in the afternoon with some sunny spells developing.

There will be top temperatures Saturday of 11 to 14 degrees in a mostly moderate southwesterly breeze, it said.

Saturday night will be mostly dry with just a few lingering showers in the northwest, however, towards morning rain will push into the south and west, it said.

Southerly winds will be mostly light but freshen towards morning and Met Eireann has said lowest temperatures will be 6 to 9 degrees.

Sunday will be cloudy and breezy with widespread rain which could turn heavy at times. 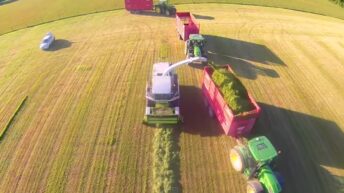