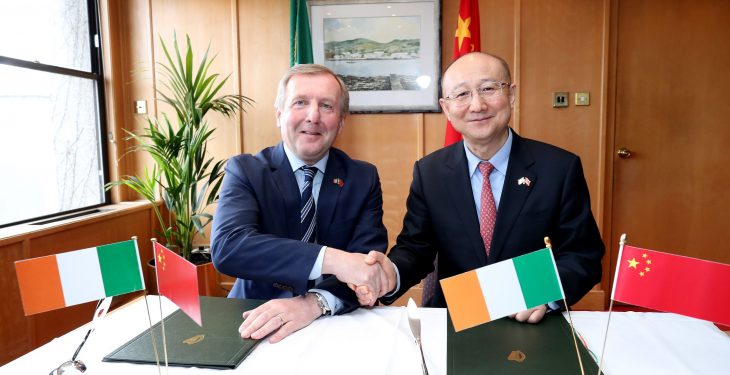 A number of ‘significant advances’ have been made in securing access for Irish beef to the Chinese market, the Minister for Agriculture, Food and the Marine, Michael Creed, has said.

Minister Creed was speaking following the conclusion of a visit by the Chinese AQSIQ Minister Zhi Shuping, who has responsibility for the Chinese Quarantine and Inspection Service, in Dublin this morning.

Both Ministers signed a formal protocol on beef exports to China; which is expected to pave the way for market access for Irish beef to China. The protocol signed this morning focused on frozen beef under 30 months of age, Minister Creed said.

This morning’s meeting follows on from Minister Creed’s trip to Beijing last September.

“I was very pleased to welcome Minister Zhi to Ireland this morning as a follow-up to our negotiations in Beijing last September. China is now such an important partner for Ireland on agri-food issues and is our third largest trading partner in this sector.

“Whilst we had constructive discussions on a wide range of issues, I am especially delighted today to have signed this Beef Protocol with China. This marks another major milestone in the process of getting Irish beef into the Chinese market.

I think we can safely say after this morning’s meeting that it is a case of when now – rather than if.

“Today’s signing marks the culmination of intensive political, technical and diplomatic engagement with the Chinese authorities. I look forward to moving forward with the next steps as quickly as possible,” Minister Creed added.

Next step in the process

In order to complete the process to allow Irish beef exporters access to the Chinese market a veterinary health certificate with AQSIQ (Quality Supervision, Inspection and Quarantine of the People’s Republic of China) must be finalised.

This is expected to be followed by an inspection visit by the Chinese Certification and Accreditation Administration (CNCA) to approve individual processing plants for export.

The next step will be for officials here in Ireland to engage in a detailed analysis of Chinese consumer safety legislation and veterinary certification, Minister Creed said.

We are working as fast as we possibly can to make that happen as quickly as possible. I’d be disappointed if we didn’t have plant inspections in 2017.

“There are a very, very significant number of plants that have expressed an interest in this and that is obviously an issue for the CNCA.

“I have met with Meat Industry Ireland with regard to access to the Chinese market; everybody wants a slice of this,” he added.

Irish agri-food exports to China have increased from approx €240m in 2012 to €780m in 2016, a three-fold increase, according to figures from the Department of Agriculture, Food and the Marine.

This made China the third largest market for Ireland’s agri-food sector in value terms after the UK and the US last year.

According to figures from the Department, beef consumption in China has increased almost six fold between 1990 and 2015 to almost 4kg per capita and it is forecast to increase even further over the coming years.

But beef production in China has not kept pace with rising demand and imports are estimated to have increased to more than 1.2m tonnes last year, accounting for around one third of beef consumption, the Department added.

Significance of visit in relation to Brexit

The search for new third country markets is a top priority for the Department and it has taken on an added urgency in the context of the challenges posed by Brexit, Minister Creed said.

“Today’s developments are significant steps in developing positive relationships and progressing trade with China, and I will continue to pursue such opportunities as a priority in China and elsewhere.

“It is part of a Brexit strategy; I mean this is a market of 1.2 billion people. Their beef consumption is increasing significantly. It is moving towards, certainly within Chinese middle classes, European norms.

It has the potential to be that significant in terms of the Irish beef industry; which is uniquely exposed in the context of Brexit. It is a key part of our Brexit strategy.

Minister Creed believes the Irish agri-food industry’s commitment to the highest standards of production, traceability, food safety and the increasing sustainability of its production systems gives Ireland a unique selling point over any of its international competitors.

The fact that Ireland was the only Member State that the Chinese delegation chose to visit on this trip ‘speaks volumes for itself‘, Minister Creed said.

A number of other advances were made in relation to exports of seafood and thoroughbred horses to China during this morning’s meetings.

A protocol to facilitate trade in thoroughbred horses for an emerging racing sector in China was also signed by the Ministers. The protocol is set to open access to China to horses not born in Ireland, but present in the jurisdiction for six months.

On live crabs, the Ministers have agreed an export certificate which will permit the resumption of exports to the Chinese market. Exports are expected to resume in the very near future.