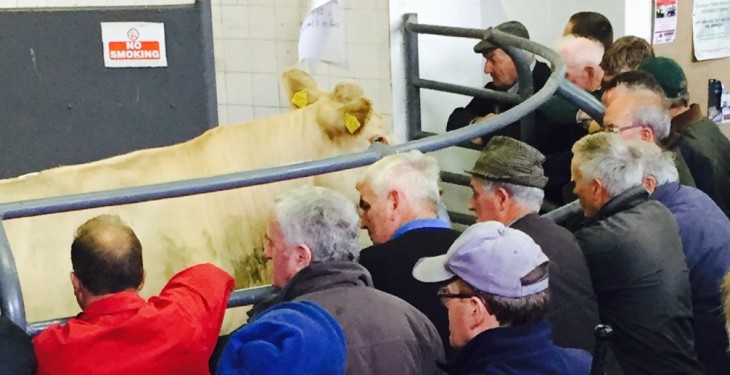 Irish, UK Marts organisations are demanding action on factory and retail dominance in the beef sector.

Escalating a campaign to create a level playing pitch for beef farmers, a combined delegation of Irish and UK Marts organisations met the Directorate General for Competition in Brussels to demand action on combined meat processor and multiple retailer dominance in the beef sector.

The delegation stated that the dominant position of retailers and meat processors across Europe must be ‘tackled’.

In Ireland, according to the ICOS National Marts Committee, Irish meat processors are manipulating the market and have effectively usurped the Bord Bia quality assurance scheme, together with UK multiple retailers, to control prices for their own ends.

ICOS stated that the meat processors have put in place more onerous conditions than are required by the Bord Bia Quality Assurance Scheme.

“These conditions have subverted fair competition for livestock and are ultimately designed to manipulate trade and pricing in Ireland and the UK,” it said.

The Irish meat factories enforce measures through their ‘Quality Payment System’ where cattle that have moved farms in the last 70 days before slaughter are penalised and do not qualify for the QPS bonus.

“The measures by the factories radically exceed the provisions of the Bord Bia Beef and Lamb Quality Assurance Scheme which allows for movements between quality assured farms during the final 70 day period prior to slaughter.

“These practices stop free trade in animals even though the livestock are compliant with the relevant regulations in Ireland and the UK,” ICOS says.

‘Interfering with the free trade of cattle’

ICOS says through their ‘conditions’, the factories are interfering with the free trade of cattle in livestock marts where it is common practice, while adhering fully to all animal transfer and traceability regulations, for an animal to be sold from farm to farm as it moves from youth through fattening and onto slaughter.

It says they are circumventing the marts system which enables free trade between farmers and provides a true reflection of the value of livestock.

“Frequent livestock transfers are a well-understood characteristic of the Irish farm sector, because many smaller farms are not able to take cattle through the full process from birth to slaughter. They sell them on to the next appropriate farm with full traceability. The livestock marts are the conduit for this live trade between individual farms. This benefits everyone in the livestock industry and it ensures a fair and open price.

“The livestock marts are the conduit for this live trade between individual farms. This benefits everyone in the livestock industry and it ensures a fair and open price,” it said.

“These can have tens of thousands of animals present to reduce demand through increased supply at peak times ICOS cited the example of US legislation being enacted to outlaw meat processors from owning beef feedlots because of the distortion to free trade, it said.

Live trade to the UK

Additionally, ICOS said it was alleged to DG Competition that no Irish owned factory in Britain will kill Irish-born cattle, effectively cutting off live trade and competition from Irish marts into Britain.

“The factories contend that the basis for their restrictions is consumer driven.

“However, there is no scientifically based animal welfare or meat quality rationale for the imposition of this movement restriction.

The onerous conditions imposed by meat plants around the movement of livestock have no basis in terms of regulation or meat quality and no justification on animal welfare or veterinary grounds.

“They are simply being used as a market control measure,” ICOS stated.