In the ‘red’ and ‘green’: Garda checkpoint catches crooked drivers

A multi-agency checkpoint manned by members of An Garda Síochána, among other forces, shed light on a number of road and criminal offences yesterday, Monday, May 27.

The checkpoint, which was set up in Co. Longford, found one vehicle to be running on red agricultural diesel from the UK.

Upon discovery, the driver of the vehicle was issued with an on-the-spot fine.

In addition, another separate driver was arrested on suspicion of drug driving, while a third driver who was found in possession of cannabis herb, subject to analysis, was also arrested, according to An Garda Síochána. 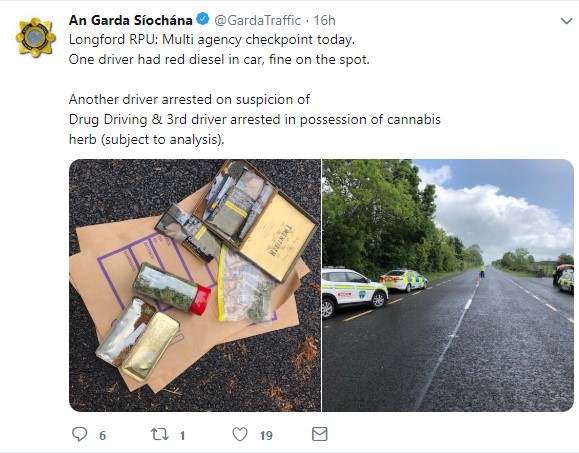 Meanwhile, in Northern Ireland, police have put forth an appeal for information in relation to a quad stolen with a number of other items earlier this month.

Issuing the appeal, members from Foyle branch of the Police Service of Northern Ireland (PSNI) also provided a photograph of the stolen vehicle, a dark-coloured Suzuki all-terrain vehicle (ATV), taken from a premises in Co. Derry.

The PSNI officers put out a statement on Saturday, May 25, saying: “Have you seen a quad like this? Is it for joy riding or being sold online?

“It was stolen along with tools and other items at a property outside Eglinton,” the statement said, in an appeal to the public for assistance in fighting rural crime.

“Constable Daniel Crowe from Strand Road requests that anyone with information contact police on 101 quoting reference 423 of 08/05/19,” the statement concluded.