Latest figures from the dairy market are suggesting that China is back buying dairy products, according to IFA National Dairy Committee Chairman Sean O’Leary.

O’Leary says imports of all dairy products into China have shot up in January 2016, an overall increase of 51% in volume over the same month last year.

The latest set of figures released today by CLAL based on GTIS data suggests that Chinese buyers are active again.

“While surplus supplies are undoubtedly part of what is maintaining low dairy prices currently, coinciding sluggish demand is also an issue. China’s absence was one of the main factors depressing demand,” O’Leary said.

“It is not unreasonable to think we may be seeing the first signs that the most important global buyer is back on the market. After all, they must by now have worked their way through much of the stocks acquired in the buying spree of 2013-14, and their domestic production, while increased from that period, still lags behind domestic demand,” he said. 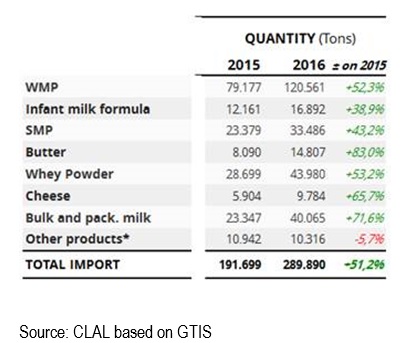 “I don’t want to overstate the case; January is always the month in which the greatest volumes are traded with China, and this is linked to the New Zealand trade deal quotas. Apart from UHT milk, the bulk of the other products are bought from New Zealand, and it is understood that their entire 2016 reduced tariff quota for all dairy products imported into China has now been filled,” he added.

“While this may dampen down further imports, it may actually be that buying will continue from New Zealand and others at full tariff rates as the needs of domestic demand grow greater,” he concluded