ICSA protest draws to a close outside Dawn Meats plant 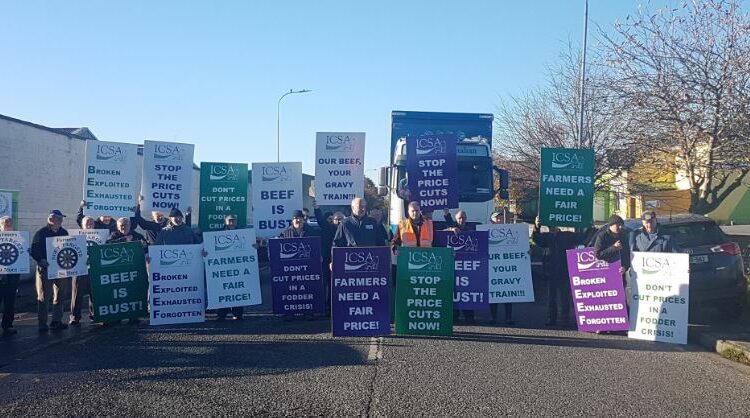 A beef price protest outside a Dawn Meats plant in Ballyhaunis, Co. Mayo, has drawn to a close this afternoon (Monday, October 15).

Organised by the Irish Cattle and Sheep Farmers’ Association (ICSA), a number of farmers gathered early this morning to block the gates of the plant over the current state of the beef price.

This is the second protest of this nature organised by the ICSA in recent weeks. Earlier this month, frustrated farmers brought ABP’s plant in Clones, Co. Monaghan, to a standstill.

The protest officially began this morning at 8:00am and lorry vehicles hauling livestock to the factory were refused entry when they arrived. It is estimated that around 25 vehicles in total were held up due to the protest.

However, these vehicles were granted access around midday as the protest drew to a close.

At the protest, the ICSA’s beef chairman, Edmund Graham, outlined that farmers cannot continue to produce beef at current prices.

@ICSAIreland protest outside Dawn Meats in Ballyhaunis has finished for today and cattle are now being allowed access again @AgrilandIreland pic.twitter.com/INs0slt6ht

He said: “It is beyond belief that in a year like this – when farmers are on their knees with extra costs arising from a fodder crisis – that the meat industry would seek to increase profits on the back of farmers.

There was an orchestrated effort to drive down beef price over several weeks. Since the ICSA first took action on October 5, the price cutting has stopped. But now we want to drive prices back up and no farmer should dream of selling steers this week at less than €3.85/kg.

“Current prices, however, are totally inadequate when costs of production are at least €4.40/kg for cattle from the dairy herd. Meanwhile, the suckler herd is not profitable unless the price is closer to €5/kg.

“It is time for farmers to fight back. We cannot go on working for nothing and risking substantial capital finishing cattle especially as we enter the expensive winter finishing period,” he said.

Meanwhile, ICSA president Patrick Kent stated that the farm organisation wanted to send a very clear message to retailers highlighting that beef farmers are being “exploited”.

“There will be no hiding place for retailers now who claim they are supporting farmers.

Retailers cannot boast about sustainable beef and then profiteer when farmers are not even getting the cost of production.

“Retailers and processors need to wake up to the fact that there will be no sustainable beef if they continue to squeeze the primary producer. The ICSA is calling for a halt to the exploitation of family farms.

“This is the second day of action and unless prices improve, further disruption cannot be ruled out,” Kent concluded. 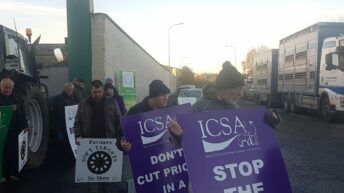 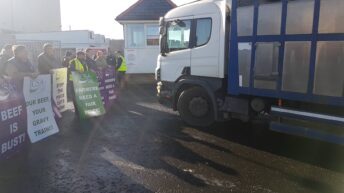