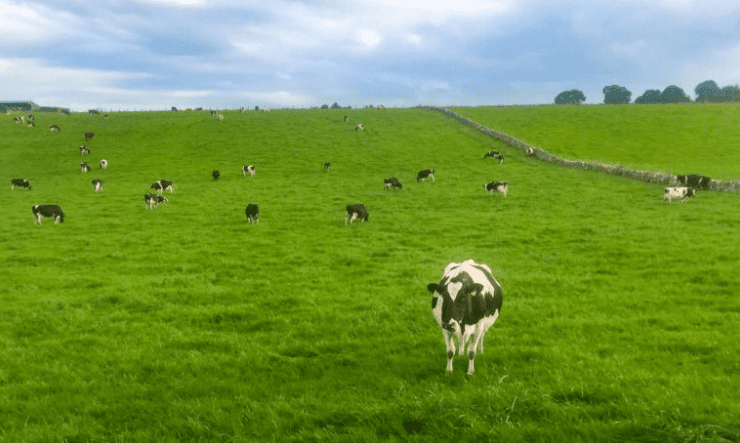 Sub-optimal rumen function leaves a lot of profit on the table through lost yield, reduced cow longevity and poor fertility. However, a new feed additive proven to guard against ruminal acidosis is providing a solution for milk producers.

That is the experience of milk producer Donal O’Connor, who runs the Streeda pedigree herd of 120 Holsteins on the 250ac he farms at Lissadell in Co. Sligo.

The coastal location of his land, 400m from the sea, promotes an extended grass growing season but there is a trade-off – a high level of rainfall averaging 50in in a typical year.

Four years ago, when Donal’s cows were grazing lush pastures, they were performing below expectation. “The cows weren’t doing as well as they should have been; we had slight fertility issues and their dung wasn’t satisfactory. It had bubbles in it,’’ he recalled.

This was caused by high levels of acid in the rumen and resulted in problems associated with acidosis. To counter this, Donal was introduced to Panatec Rumen Proof by Leo Forkan, sales manager at Mayo Healthcare.

A rumen enhancer for greater performance

Mayo Healthcare, in cooperation with the National University of Ireland, had developed a novel non-antibiotic platform technology resulting in a residue-free feed additive named Panatec. Its ingredients are approved for use as a feed additive, acting as a rumen enhancer for greater performance and improved energy in the rumen.

“I was buying boluses and calf products from Mayo Healthcare / Aurivo and Leo suggested it would be worth me trying Rumen Proof,’’ Donal recalled. That marked an important turning point.

“We started using Rumen Proof that summer and got some very good results,’’ said Donal. “The cows milked surprisingly well even though it was not a good year. Yield was up, cow condition held and we had a high level of fertility, cow heats were very strong.

“It is difficult to measure successfully without a control group but feeding Rumen Proof was the only change we made to the system.’’

That year, the annual average milk yield rose by over 2L/day – the herd’s average annual yield is now 8,000L. “Last year, we produced just short of 1 million litres of milk from 120 cows at 560kg of solids per cow,’’ said Donal, who sells his milk to Aurivo.

He adds Panatec Rumen Proof to the diet of lactating cows in the winter with the Total Mixed Ration (TMR) of grass silage, straw and meal. And, in the summer, he sprinkles on the buffer feed or added to the parlour ration.

From this week he will also be able to include it in the meal now that Mayo Healthcare has produced a micro-encapsulated version of the product.

In 2018, university trial work in Austria demonstrated a significantly higher pH in the rumen of cows treated with Rumen Proof compared to a control group. For Donal, acidosis had previously caused high levels of lameness which resulted in cows exiting the herd early.

He now has minimal issues. In 2018, only six cows needed to have their hooves pared, despite a walk of up to 1km along a gravel track from fields to the milking parlour.

“We have very little problems with lameness now,’’ said Donal. “It is hard to measure the health benefits of feeding this white powder to cows, but it is the things like stomach health that protects against lameness and we are certainly seeing the results of that.’’

And, keeping a check on lameness means that cows are in the herd for longer – one of Donal’s best cows was born in 2005. “This is a good example of how you can get cows back in calf when they are milking right,’’ he said.

“I like to see a mature cow, at six to seven years, when she is really at the best of her peak milk production days. If you can stamp out the likes of lameness and so many issues and have got enough winter accommodation, there is no reason why cows shouldn’t last that long.

“Most cows leave the herd for a physical reason, not because you decide you don’t like them.’’ Thanks to cow longevity he was in a position to sell 20 surplus heifers last year.

Donal milks his cows in a 10-unit swingover parlour which he plans to upgrade to a 16-unit system in the near future. Five years ago, a 90-stall cubicle shed was built to complement existing facilities, fitted with Wilson cubicles and pasture mats topped with pads.

Cow families in the Streeda herd can be traced back over 80 years, with many cows in the herd classified as ‘excellent’ or ‘very good’. A block of 25 cows calve in October and November and the remainder in a tight block in February and March.

Annual meal input averages 1t/cow, although it was higher in 2018 due to the extreme weather conditions. Donal has confidence in Panatec Rumen Proof because he has experienced the repercussions of cutting it out from the diet.

“We stopped using it one August because we didn’t think there was any need for it because the cows were past their peak, production was dropping off, but their performance wasn’t as good. Last year, we used it right through the year.’’

When cows are performing at their optimum, it takes away some of the pressure in an industry where margins are tight, he adds.

“Quite a lot of reinvestment is needed so you need a profitable turnover. It is difficult to quantify the return on investment from a product like Rumen Proof, but for us it has definitely made a major difference to the bottom line.’’

For farms wishing to add Panatec Rumen Proof directly into feed, it is now available in micro-encapsulation for the dairy nut / coarse ration through Aurivo, Roches feeds and Bolger’s Agri.

For more information on Panatec Rumen Proof, go to: www.mayohealthcare.ie.