How Fonterra plans to dominate the Chinese dairy market with 15,000 cows 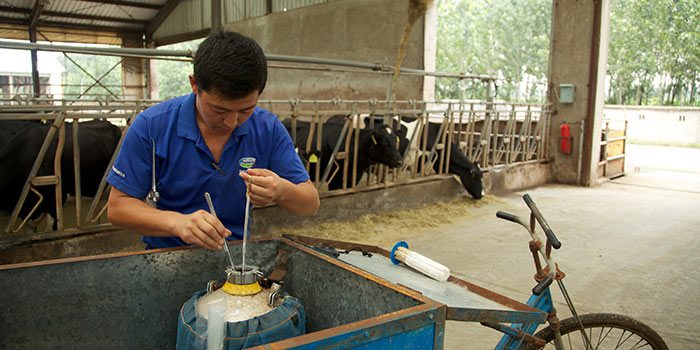 Fonterra announced its interim results for 2015, it predicted a possible upturn in dairy prices towards the end of 2016.

Fonterra exports around 96% of the milk it produces and Chief Executive Theo Spierings said that Fonterra converted an additional 235m litres of milk Fonterra into higher-returning consumer and foodservice products in the last six months.

“We aimed to make the most of global consumption growth by building demand for higher-value products in our consumer and foodservice markets.

“We remain focused on growing demand, especially in the eight markets where we currently hold or want to gain leadership or a very strong position: New Zealand, Australia, Sri Lanka, Malaysia, Chile, China, Indonesia and Brazil. These are well established markets for Fonterra, so we are working off a strong base.”

He also mentioned Fonterra’s farms in China, which he said, are key to this growth.

“We are achieving operational efficiencies on the farms which are helping offset the current low domestic milk price in China.”

However, the co-op also confirmed in November 2015 that it would not be investing any further into its Chinese fresh milk operations until local demand and prices supported the move.

Fonterra’s goal is to be producing one billion litres every year in China by 2018 and with two farms milking in the Hebei Province near Beijing and another three under development it says it’s on the right track.

It built its first farm, Tangshan Fonterra Farm, in 2007 as a pilot, to see if the co-op could produce New Zealand standard milk, locally.

Since then, the herd has doubled in size and the average production per cow has increased by 30%, it says.

Today, the farm is producing around 28m litres of the country’s highest quality milk every year. Fonterra also has another farm milking in the Hebei province and another three under construction. However, its China operations have been loss making to date.

The plan is that when complete, these farms will milk about 15,000 cows and produce 150m litres of fresh milk every year, right on the doorstep of Beijing. It aims to have 1 billion litres of milk coming from its farms by the end of 2018 it says.

Herds on the Fonterra farms in China are housed in barns and milked three times a day, with the average cow produces around 34L of milk a day.

“No matter where in the world our milk is produced, it must meet Fonterra’s strict quality, safety and sustainability standards. All milking facilities are cleaned before and after milking and samples of all milk produced are frozen and kept on farm so it is always available to be tested.”

It said at its interim results that despite losses of €17m on its Chinese farming operations in the first half of the year.

Last year it announced a joint venture with Abbott – one of the world’s largest infant formula manufacturers, but this has yet to materialise on the ground yet.

Chinese consumption, it maintains will double over the next eight years and it intends to be in a position to supply that demand.