How does Irish milk production compare to other countries?

Last week, the latest figures from the Central Statistics Office (CSO) showed that Irish milk production was down 4.6% on January 2016.

Irish creameries took in an estimated 140.9m litres in January.

But how does Irish milk production compare to other milk producing countries around the world?

Some 2.42 billion tonnes of milk were produced in January in New Zealand.

This year milk production is forecast to be 2% below the 21.17m-tonnes mark and 3% below peak production of 2014 before the current milk price downturn began. 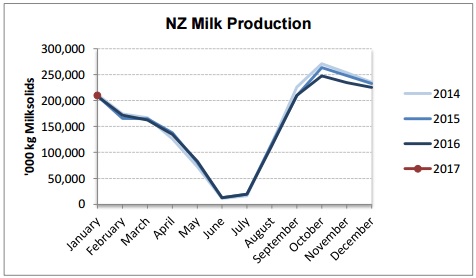 US milk production continues to increase

Meanwhile, the latest figures from the US Department of Agriculture (USDA) show that US milk production continues to increase.

The USDA has attributed relatively low feed prices, in part, in the latter part of 2015 to the increased production in 2016.

With improving returns in late 2016 and early 2017, slightly higher growth in the milking herd is now forecast by the USDA for 2017.

The estimate for dairy cows for the year has been raised by 5,000 to 9.370m head, with most of the growth occurring in the second half of the year.

The milk per cow forecast has also been raised to 23,195 pounds per head, 10 pounds higher than last month’s forecast.

In Australia, the latest milk production figures show that for December, production was down 4.1% on the previous year.

In its February situation and outlook report, Dairy Australia said it predicts a fall in production this year of between 6 and 8%, compared to the 2015−2016 year.

This would imply a volume range of between 8.8 and 9.0 billion litres.