Hopes that Fair Deal changes can be passed by year end

It is hoped that approved changes to the Fair Deal Scheme can be passed through both houses of the Oireachtas by the end of the year.

It was confirmed yesterday (Tuesday, July 24) that the Government had approved a proposal to change the treatment of farms and businesses under the Nursing Home Support Scheme, also known as the Fair Deal Scheme.

The Minister of State with special responsibility for Mental Health and Older People, Jim Daly, announced the development yesterday.

The minister explained that he chose to prioritise changes to how small businesses and family farms were treated under the scheme.

“The point I’m trying to make is that for me, as minister, I had to prioritise an issue within the Fair Deal Scheme to address. There are a number of other issues that people would probably like to see addressed in this.

What I’m hoping is that I can bring the legislation through the houses very quickly and that we can keep a single focus on addressing this one measure and it is a measure of fairness principally.

“It is a measure of fairness for farm families the length and breadth of the country who rely on the asset; we want to keep farms viable in rural Ireland.

“I do hope that people will work with me to ensure that we can keep a single focus on this issue during the legislative timetable and try and get it through before the year end,” he said.

Review of the scheme

Continuing, the minister stated that an overall review of the Fair Deal Scheme in 2015 will not be published until the end of the year.

While the review was compiled, it was not completed to a satisfactory standard, according to Minister Daly.

A lot of elements had to be reexamined, he added.

Commenting on the scheme, Minister Daly said: “I think, for the most part, most people will agree that the Fair Deal Scheme is a good scheme; it works very well.

“It’s worth highlighting that the longest anyone has to wait for, when you look at the context of the overall health service, is four weeks to access the Fair Deal Scheme and to have payments put in place for somebody to be put into a nursing home.

When you think of an overall budget of about €15 billion for health, €1 billion of it goes into nursing home care. It’s a costly scheme, but it is run quite well – it’s efficient. We are on budget this year, we’re not running ahead of budget. 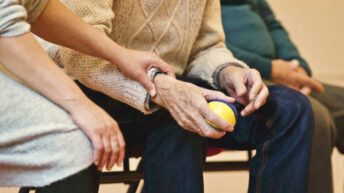