History made at Ballymena Show 2014 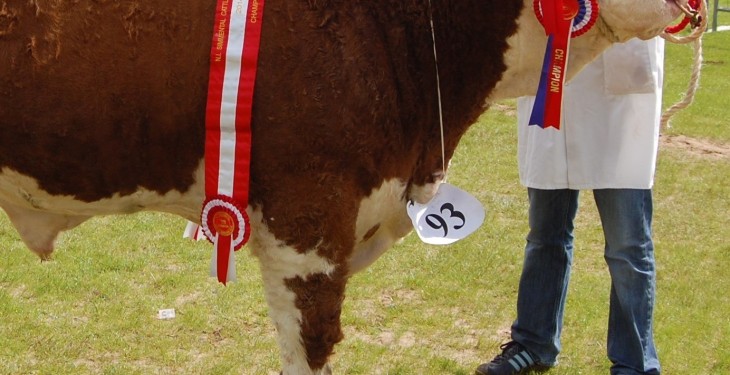 Christopher Weatherup with the Simmental Champion at Ballymena Show 2014

For the first time ever a commercial animal led the Parade of Champions at this year’s Ballymena Show in Co. Antrim. Bathed in warm sunshine throughout the two days, last weekend’s event attracted a significantly increased turnout of livestock. But it was a 14-month old Belgian Blue cross heifer, owned by Mr Robert Miller from Moneymore in Co. Derry, that grabbed all the headlines. Aptly named – ‘She’s a Diamond’ – Beef Inter-Breed judge James Playfair – Hannay, from Kelso in Scotland, described her as the perfect beef animal.

“She has tremendous length and beef in all the right places,” Mr Playfair-Hannay told Agriland.

“I couldn’t fault her. Some people might question why I opted for a commercial beef animal as my Champion. I am a pedigree Angus and Beef Shorthorn breeder and am totally committed to promoting our native breeds of cattle. The reality is that Mr Miller’s heifer is a choice animal”

Mind you, she was up against some serious competition when it came to judging the Supreme Cattle Champion of the Show. Lining up against her in the final class of the day, was the Inter Breed Dairy Champion, a truly elite Holstein cow, owned and bred by Iain McLean, from Bushmills in Co. Antrim. Born in January 2010, Priestland 4951 Shot Bedazzle calved for the second time back in February of this year. A daughter of the renowned dairy sire Picston Shottle,  she looked an absolute picture throughout the day.

As it turned out, Ballymena Show 2014 will live long in the memory of the entire McLean family as they managed to win the Holstein, Ayrshire and Coloured Breeds’ championships at the event.

“Bedazzle is a very special cow,” Iain explained. “We have had a lot of interest from breeding companies in Great Britain to have her contract mated. A bull calf produced in this way would, potentially, be a very valuable sire of the future.

“We have had a very successful start to the show season. Our plan is to attend most of the events, planned for the summer months.”

Meanwhile, the Texel breed was flying the flag for the sheep industry at Ballymena. Well known breeder Alastair Gault won both the breed championship and the supreme inter-breed title with an excellent yearling ewe.

This is a very important year for the Texel enthusiasts in this part of the world as it marks the 40th anniversary of the breed’s introduction to the island of Ireland. Over the past four decades the breed has proven itself at both commercial and pedigree level. The success of Texels has been attributed to the sheep’s unique ability to convert grazed grass into high quality meat. And at a time of tremendous resurgence for the sheep industry as a whole in Northern Ireland, the Texel breed looks set to enjoy another 40-plus years in the limelight.