High lamb supplies set to continue in the UK

Lamb supplies are set to remain high for the foreseeable future in the UK leading to continued pressure on prices, according to EBLEX.

It says lamb slaughterings have been high in the first few months of this year as the remainder of last year’s bumper lamb crop comes to the market.

EBLEX says with a larger breeding flock recorded in the December survey and seasonal conditions good once again, its latest forecasts anticipate another large lamb crop.

Consequently, it says high supplies are set to remain the norm for the rest of this year. At the same time, cull ewe numbers, which have been very low over the last year, are likely to return to more normal levels.

As a result, according to EBLEX sheepmeat production in the UK is forecast to rise by 6%, compared with 2014, to the highest level for seven years.

It says while increased exports may mitigate this growth to some extent, there will be more sheepmeat on the UK market over the coming year. 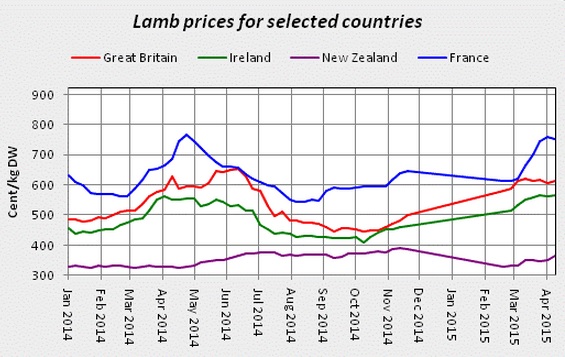 How this impacts on the market will depend on demand, it says.

But it seems likely that prices will remain under some pressure, according to EBLEX.

According to Bord Bia the slowdown in the British trade was reported on the back of a rise in supplies.

It says the SQQ live price for lamb in England and Wales was making the equivalent of around €5.78/kg dw towards the end of the week.

Supplies at Irish sheep export meat plants for the week ending April 26 stood at around 42,000 head which was 12% behind the corresponding week in 2014.

Cumulative supplies for the year to date are currently running slightly behind year previous levels standing at around 647,000 head.