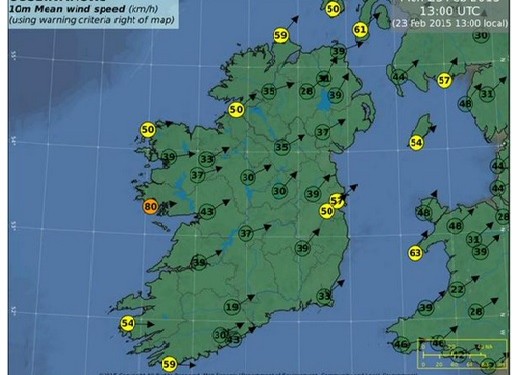 Met Eireann has issued an orange weather alert warning that gusts of up to 110km/h are to hit the country until Tuesday morning.

Winds of up to 65-80km/h are to be expected for exposed coastal and hilly areas, with gusts reaching 110km/h in some areas.

Counties Donegal, Galway, Leitrim, Mayo, Sligo, Clare, Cork, Kerry and Limerick are all under alert from today until Tuesday morning.

The Road Safety Authority (RSA) is advising all road users to take extreme care when using roads in the affected areas.

Met Eireann has also said that there will be high seas and some high tides and coastal flooding is possible.

In light of the orange weather warning the RSA is advising users to be aware of objects being blown out onto the road and to expect the unexpected.

The RSA is telling road users to allow extra space around vulnerable road users such as cyclists and motorcyclists as they may be blown off course by strong winds.

The RSA is also advising drivers to slow down as it takes longer to stop a vehicle on wet roads.

The RSA also has the following advice for driving in flooded conditions; if the road ahead is flooded choose another route, do not attempt to drive through it. Flooded roads that appear shallow could be deeper than you think.

Watch out for washed out roads, earth slides,broken water or sewer mains, loose or downed electrical wires and fallen or falling objects, it says.