The latest supermarket share figures from Kantar Worldpanel in Ireland, published for the 12 weeks ending March 1, show contrasting fortunes among the major supermarkets in an increasingly competitive marketplace.

David Berry, director at Kantar Worldpanel, said that Dunnes’ recent ‘Shop & Save’ campaign looks to have made a mark with shoppers.

“The retailer’s sales have grown by 6.5% over the latest period, improving its market share by just over one percentage point to 23.4%. Dunnes has successfully encouraged its customers to buy more, growing the number of trips where €100 or more is spent by an astonishing 25%.

“One point to note is that this time last year Dunnes was struggling, with sales falling by almost 5%, so while performance is positive this year the benchmark for comparison is relatively low.”

Elsewhere among the big three retailers, SuperValu’s 0.4% sales growth has put it almost on parity with Tesco. SuperValu’s share of the grocery market is now 24.9%, just 0.1% behind Ireland’s largest supermarket. SuperValu has attracted an extra 50,000 customers this year which means that three quarters of all Irish households shopped in SuperValu in the latest period.

Tesco remains Ireland’s largest supermarket with one in every €4 spent on groceries going into its tills. However this is lower than this time last year with sales down by 3.7%. The main driver of this sales decline does appear to be changing. Shoppers had been cutting back the number of products they bought there. Now, they are buying a similar number of products but at a lower price.

Both Lidl and Aldi continue to post impressive performance, with both enjoying growth of 10.7%. Lidl’s market share has improved to 7.6% and Aldi now stands at 8.1%. 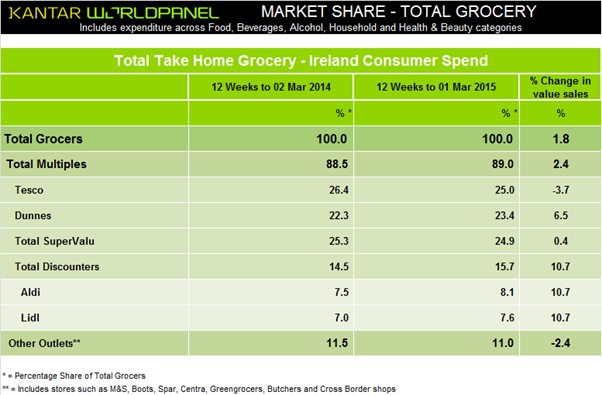