There’s plenty of reseeding being carried out across the country at present. This island prides itself in turning grass into milk and meat and breeding quality varieties that will yield is key to turning a profit.

Grass yield and quality affects the profit left in farmers’ pockets and the forage breeding programme at Teagasc Oak Park is constantly working on breeding varieties to suit Irish conditions.

This year Oak Park was launched. It is the first variety to come from the Teagasc/Goldcrop marketing agreement.

AgriLand went along to the launch of this variety to find out just how it came to the market and the long process that was involved.

Patrick Conaghan is the research officer at the helm of the Forage Breeding Programme at Teagasc Oak Park and he gave an overview of work being done at the site.

Research into grass varieties has been carried out at Oak Park since 1960. However, breeding only began on a large scale in 1985. The programme has also worked on white clover varieties and in 2008 started a red clover breeding programme. 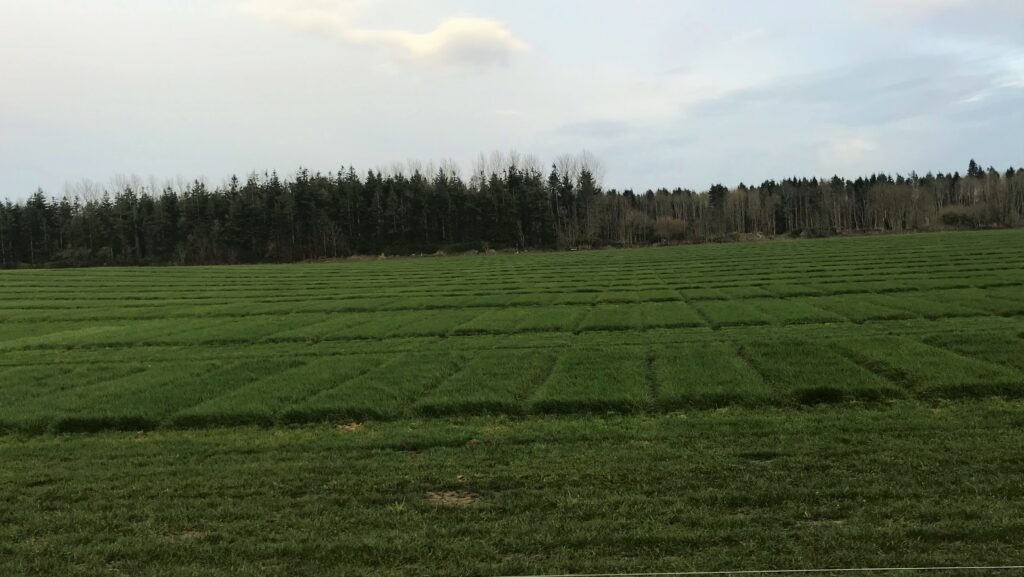 Some of the grass plots at Oak Park

Patrick gave some details on the history of the programme: “From 1960-1985 just one perennial ryegrass variety and one white clover variety were commercialised from the research at Oak Park.

“From 1985 to present there was a significant change in the direction and the number one and the main priority now is the breeding of commercial varieties.”

“Teagasc does not commercialise, produce or sell the seed from these varieties,” Patrick explained.

“We have a long-term agreement with Goldcrop, whereby Goldcrop has exclusive rights to the seed production, distribution and marketing for all new varieties produced from the programme.” 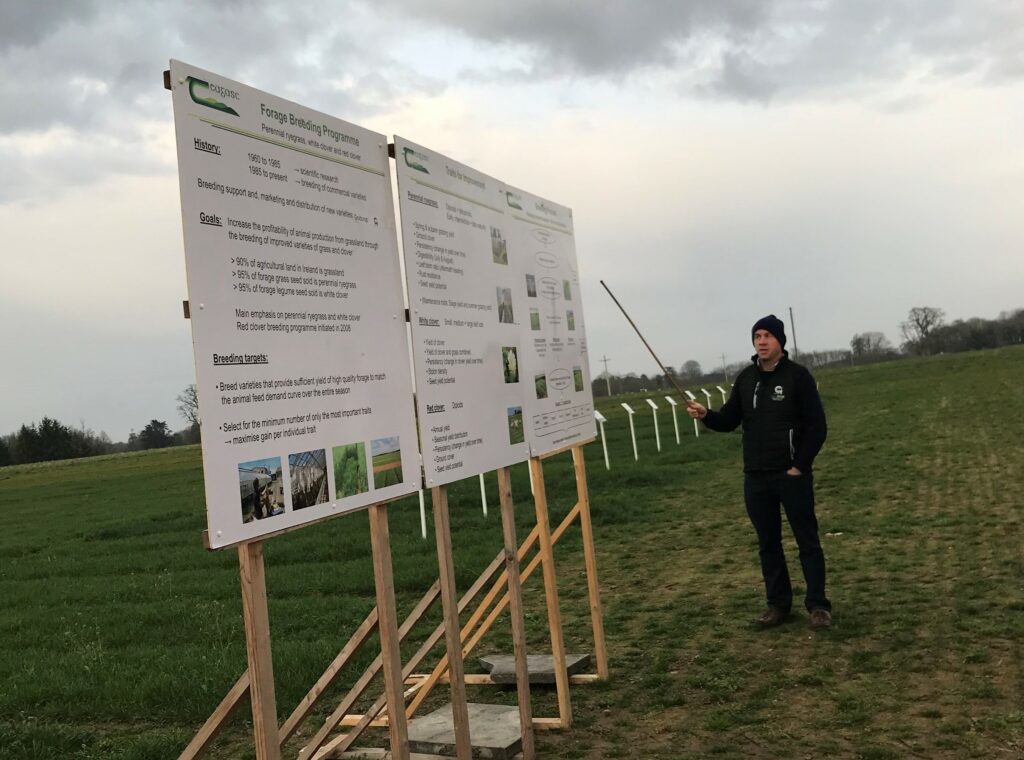 Advantages of a native breeding programme

The advantage of having a native breeding programme means that varieties are bred to match the animal feed demand over the entire season.

Pat explained that the minimum number, of only the most important traits, are selected in order to maximise the gain per individual trait. 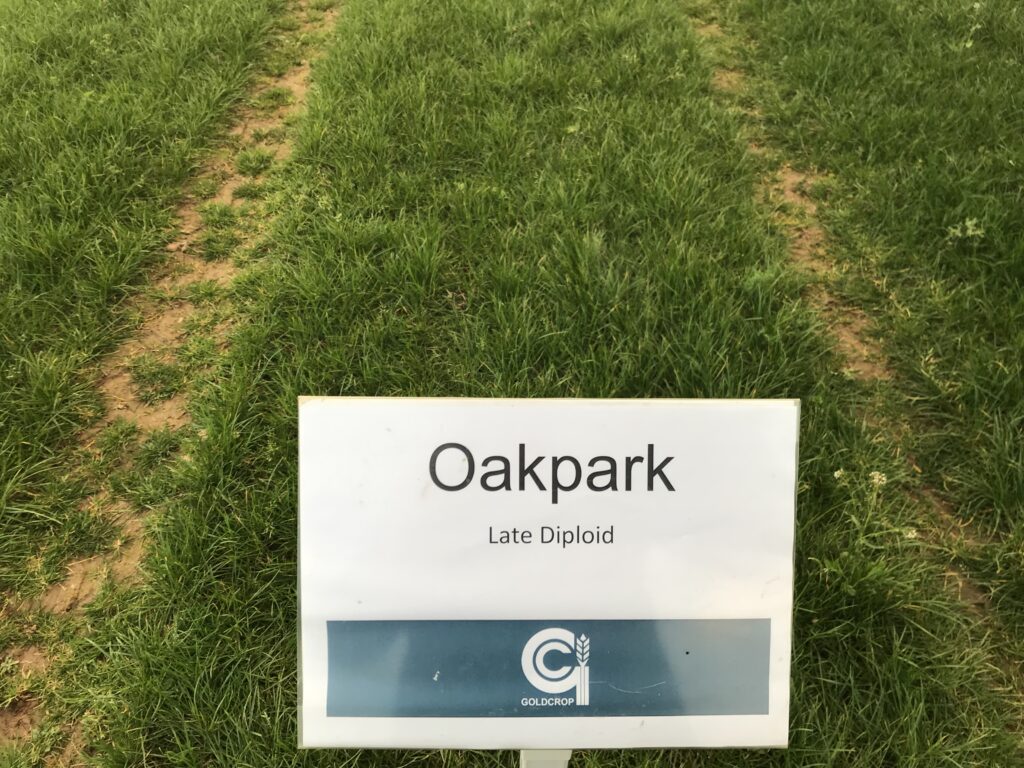 In recent times focus is turning to later heading dates.

“In perennial ryegrass we breed both diploids and tetraploids. We have in the past concentrated on all of the different heading date groups – early, intermediate and late – but as of late we tend to focus mainly on late intermediate and the late-maturity groups.

“Our goal is to increase spring and autumn grazing yield, ground cover and consistency.

We look at the performance each year and what we like to see is that yield doesn’t decrease over time, it remains constant or even increases over time.

Patrick explained how quality is important, particularly factors like digestibility in the middle of the season, leaf to stem ratio and rust resistance. It is also important that varieties produce economic yields. 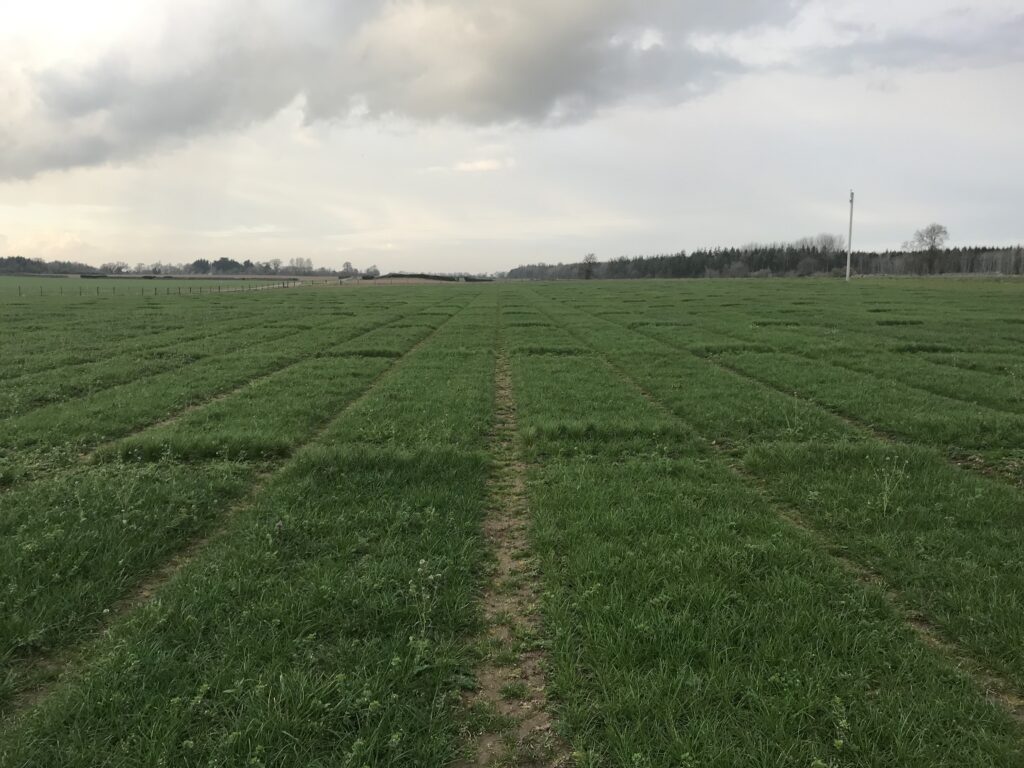 The breeding process starts with an original or a base population. This is the population that is being improved.

Wild grasses never bred before, gene bank populations, other peoples’ varieties or Teagasc’s own bank of varieties are planted out and a large number of plots are evaluated. Traits like disease resistance and persistence are measured at this point.

The plants that have passed the initial selection are crossed and the seed is harvested. 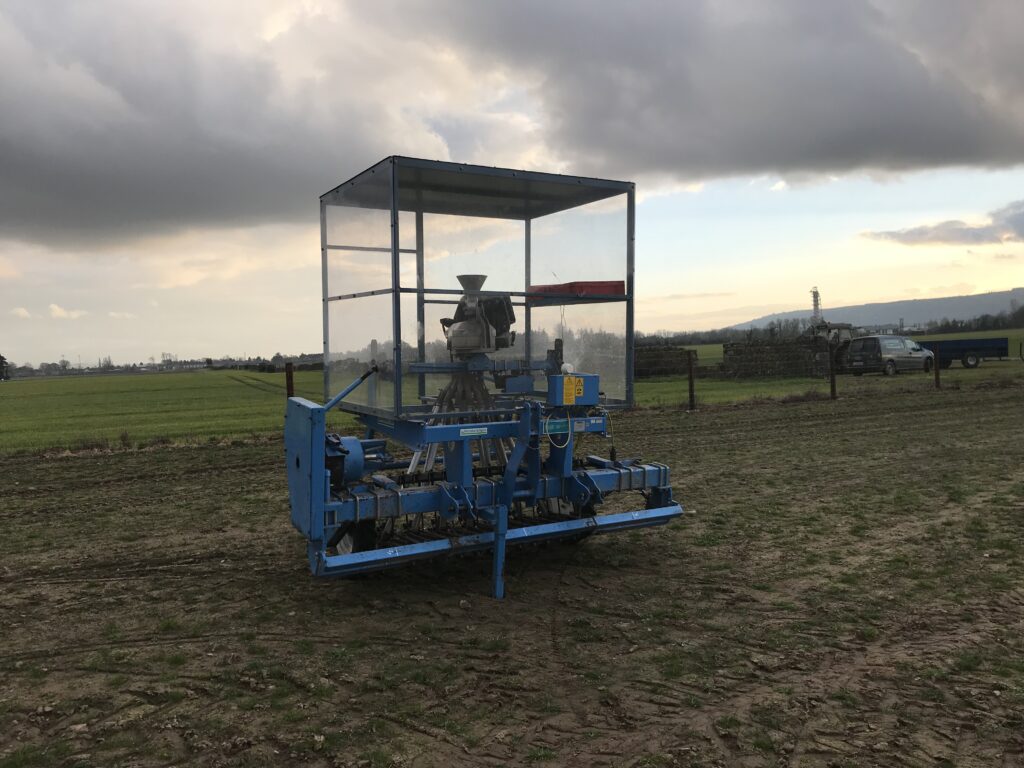 When the varieties are sown in the field they undergo different management practices. 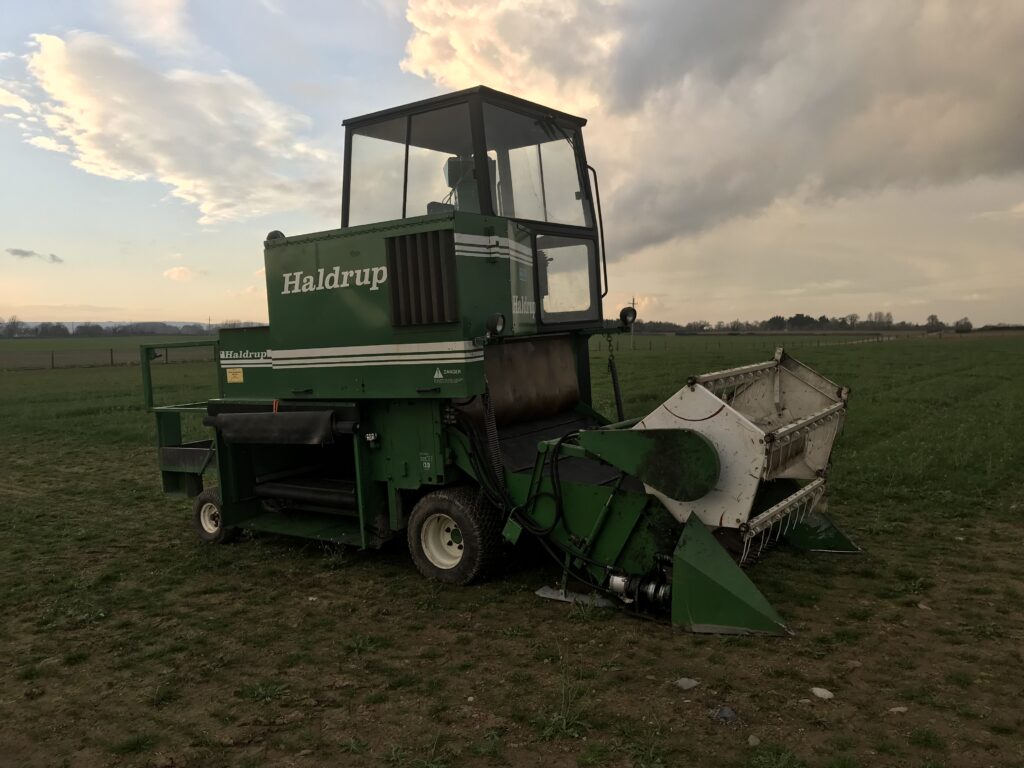 The Haldrup is used to harvest grass from the plots

“We sow out rows and we score for rust resistance and we have a new one this year which is our cattle grazing management.”

This season 800 plots from the breeding populations will be grazed by cattle and measured for traits like post-grazing sward height and grass utilisation. 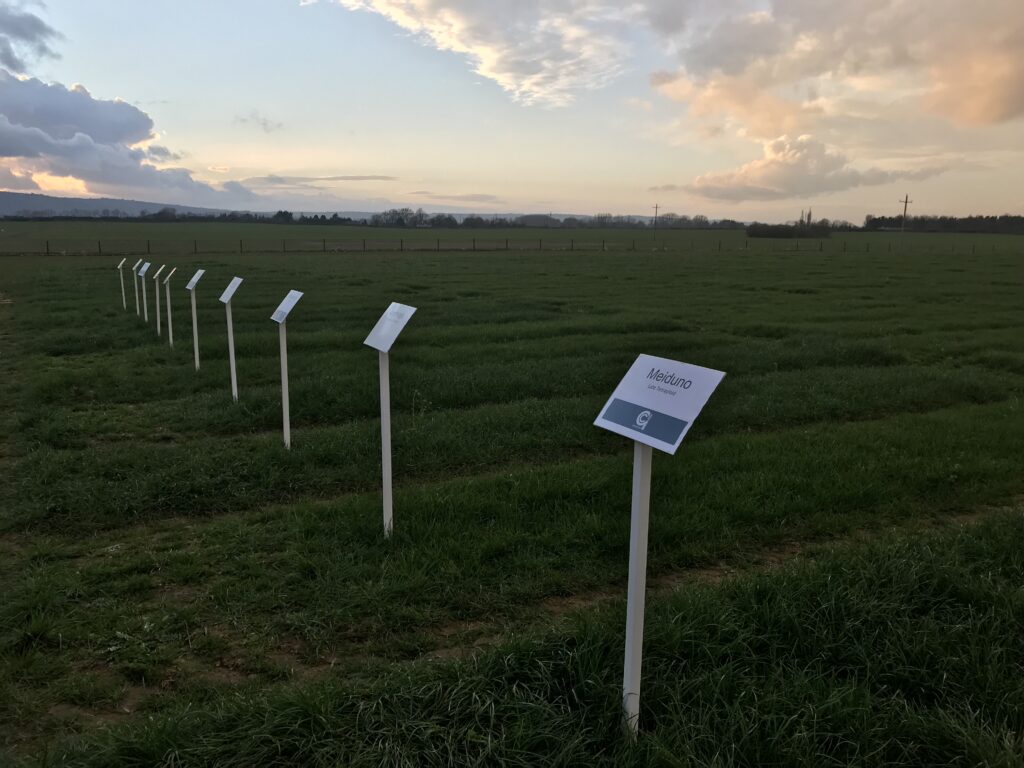 The seed from these crosses is sown in trials at Oak Park and across Europe and enters international recommended list trials. 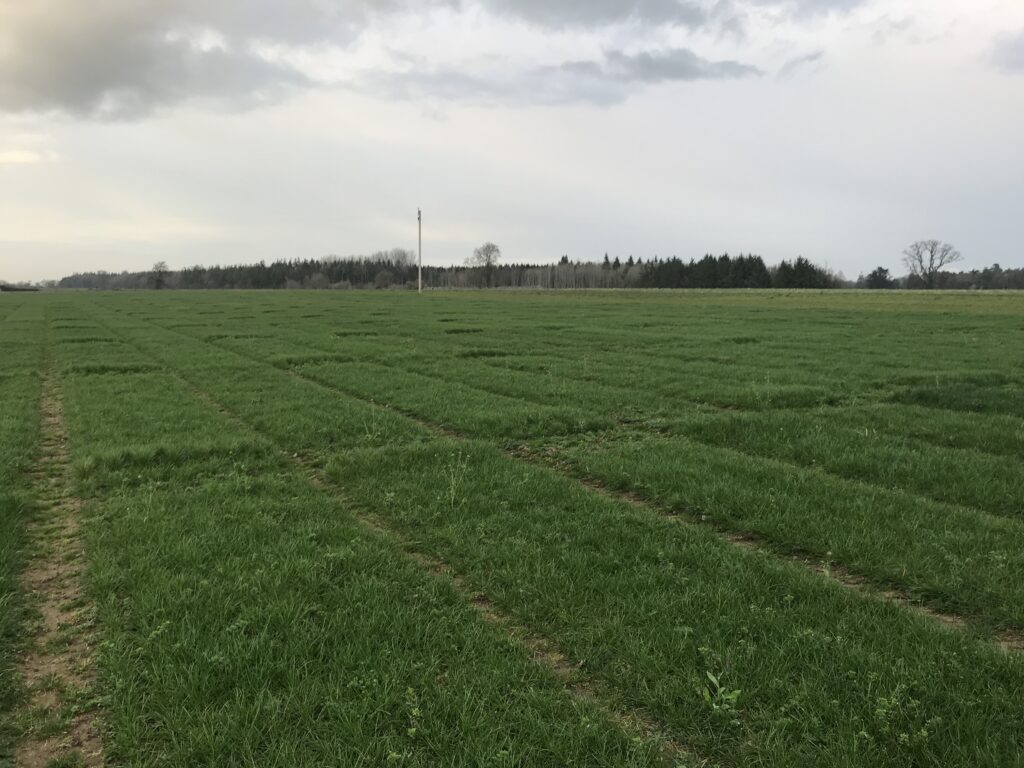 Plenty of aphids about, but March sowing has reduced risk