The average grass-rich dairy farm in 2014 generated a net profit of €1,836/ha compared to €1,714/ha on the grass-poor dairy farms according to the Teagasc e-profit monitor figures for the year in question.

Grass-rich dairy farms are defined as those businesses utilising in excess of 8.1t of grass dry matter per hectare per annum.

Output per ha on the grass rich farms was, on average, 107kg milk solids/ha or 13% lower than on the grass poor farms. This is as a result of a lower average stocking rate (-0.06 LU per ha) and lower output per cow (-38kg milk solids per cow). 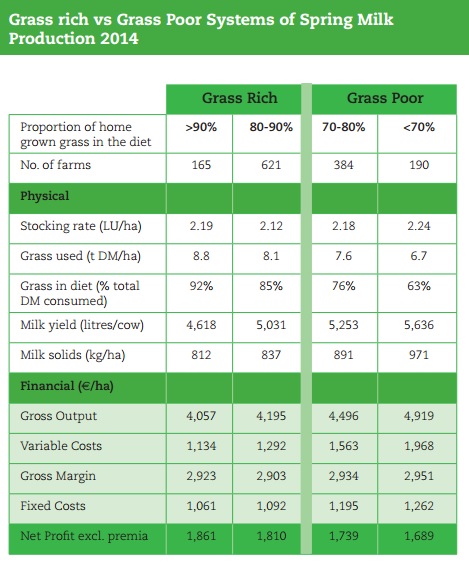 On average, the grass rich farms had lower variable costs than the average of the grass poor farms at €1,213/ha versus €1,765/ha.

However, as a percentage of gross output they accounted for only 29% compared to 37% of total variable costs on average on the grass poor farms.