Wheat price declined this week in LIFFE and MATIF markets for nearby and future markets. On Thursday evening, Chicago Board of Trade (CBOT) wheat tumbled from 540.25c/bu to 529.60c/bu.

The initial surge in wheat price came from demand for wheat and flour and the forecast was that this would most likely be a temporary rise.

As of yet, weather is not having any major impact on grain prices, but the months ahead will be the bigger players when it comes to yield and weather.

On the continent, Romania announced last week that it will not export wheat to non-EU countries. There have also been reports that other countries will limit exports.

In the US corn used for ethanol production was lowered 375 million bushels to 5.05 billion as less vehicles are on the road. Ending stocks of US corn were estimated to be raised by 200 million bushels in the report.

As we’ve seen before where corn stocks are widely available and corn price is competitive, barley and wheat prices can take a hit.

On Wednesday evening, April 15, the FOB Creil price for Planet malting barley was €168/t. This is the second price to be used in the averaging model for Boortmalt suppliers in Ireland.

Paris rapeseed for May took a short-term drop of 25c/t to €369/t on Wednesday, April 15, before increasing to €371/t by close of business on Thursday.

Brent Crude oil was at $27.96 a barrel during the week and the International Energy Agency expects oil demand to be at its lowest level since 1995 this month. 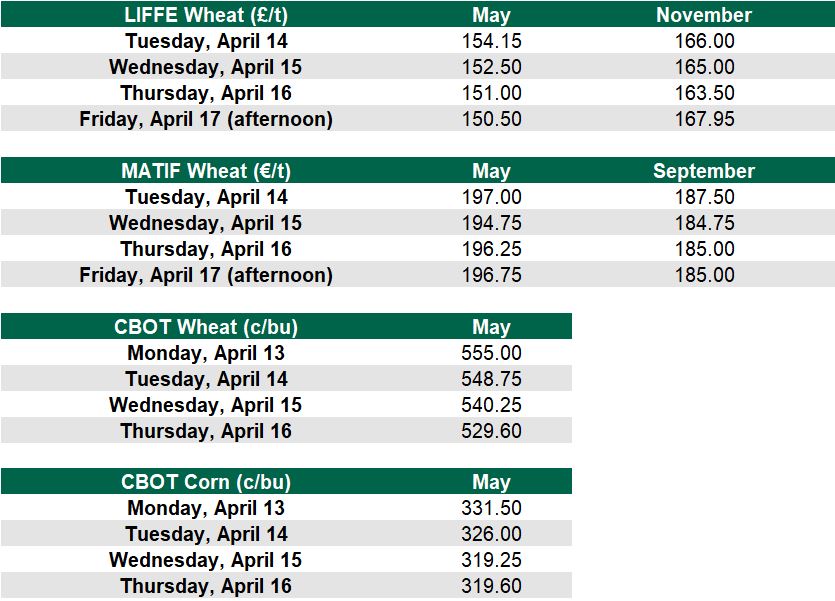 Products to use up from your store in 2020