Glanbia has released its 2015 figures, say it delivered a “strong performance” during the year, with its performance nutrition range driving growth.

It capital investment spend in 2015 was €123.6 million, which it describes €86.2m as “strategic investment in support of the organic growth potential of the business” – a new high-end whey production facility in Idaho and new packing facility in Chicago.

During the year it sold its share of a joint venture in a Nigerian based infant formula company, Nutricima, for €28.5 million, while it bought thinkThin – a nutrition bar company – for €202.4m.

It says it offset by strong cash conversion with the Group delivering €281.4m in operating cash flow during 2015.

The Board is recommending a final dividend of 7.22c/share, bringing the total dividend for the year to 12.10c/share, representing an increase of 10% and returning over €35m to shareholders.

Last June Henry Corbally was appointed Group Chairman replacing Liam Herlihy who retired at the AGM. Patrick Murphy was appointed Vice Chairman on the same date having served as a non-executive director for the past four years.

The Group expects to achieve an 8% to 10% increase in adjusted earnings per share in 2016 and says its performance nutrition will remain its main driver.

Global Ingredients is expected to grow earnings as a result of improved product mix following capital investment in 2015 and continued development of higher value nutritional systems business with customers.

Glanbia Performance Nutrition (GPN) saw revenues of €923.1m reflecting volume growth of 1.5%, the impact of acquisitions of 7.8% and a net pricing decline of 2.6%. EBITA increased 28.3% in the period and EBITA margins increased 250 basis points to 14.7%. The improvement in margins was driven by operating leverage, improved branded product mix and raw material price deflation.

Global Ingredients (GI) had a reduced performance in 2015 as a result of difficult dairy markets which impacted US Cheese and Ingredient Technologies. Revenues decreased 12.8% to €1,218.0m reflecting market related price decreases of 17.8% which were partially offset by a volume increase of 5.0%. As a result EBITA decreased 11.6% to €106.6m.

US Cheese revenues decreased in 2015 due to market related pricing declines. On average, cheese pricing in the US was down 25% year on year.

Volumes improved in 2015 as cheese plants operated at close to full capacity throughout the year.

The market environment for Ingredient Technologies was challenging in 2015 due to deteriorating dairy markets throughout the year. This impacted overall pricing with market prices down substantially across the portfolio. Volumes also declined and this led to a reduction in performance year on year.

The project to create one integrated GI organisation is progressing to plan. Over the next 12 months the business structure will be fully reorganised into a single commercial team focused on GI’s nutritional ingredient portfolio.

This will be supported by centres of excellence across areas such as product supply, innovation and strategy. These changes will enable GI to be a more agile, integrated and consumer insight driven organisation delivering to customers the full suite of Glanbia’s capability. The total cost of this project will be approximately €15m to €20m.

Dairy Ireland delivered a good performance in 2015 driven primarily by Consumer Products. Revenues increased 2.7% reflecting a 1.8% increase in volumes and a 0.5% decline in pricing. Bolt on acquisitions in Consumer Products contributed 1.4%. EBITA margins recovered by 140 basis points to 4.5%.

Consumer Products delivered a good performance in 2015. The investment in operational efficiencies, mix improvement and some reduction in input costs enabled a recovery in margins. Revenue growth was driven by increases in value added milk and cream sales plus bolt on acquisitions. Glanbia will continue to innovate and invest in its brand portfolio both domestically and internationally.

Agribusiness’ performance in 2015 was broadly in line with prior year, it says. Returns from fertiliser and feed sales declined as a result of reduced demand for fertiliser and reduced margins in feed.

This was offset by an increase in sales of food grade oats as customer demand for this high quality consumer product continues to expand.

Revenues from Glanbia’s share of Joint Ventures & Associates decreased 17.3% in 2015 – the main drivers were the decline in global dairy market prices during the year which led to a price reduction of 19.7% and the disposal of the Group’s interest in Nutricima which resulted in a 2.5% decrease.

This was offset by a volume increase of 4.9% largely driven by increased throughput in Glanbia Ingredients Ireland following the abolition of EU milk quotas in April 2015. EBITA of €39.7m was similar to prior year with margins improving by 70 basis points.

GII performance in 2015 was slightly ahead on the prior year. Glanbia says a challenging dairy market environment reduced margins in the business and this was offset by higher volumes and cost reduction.

Its milk suppliers increased production by 18% during the year. 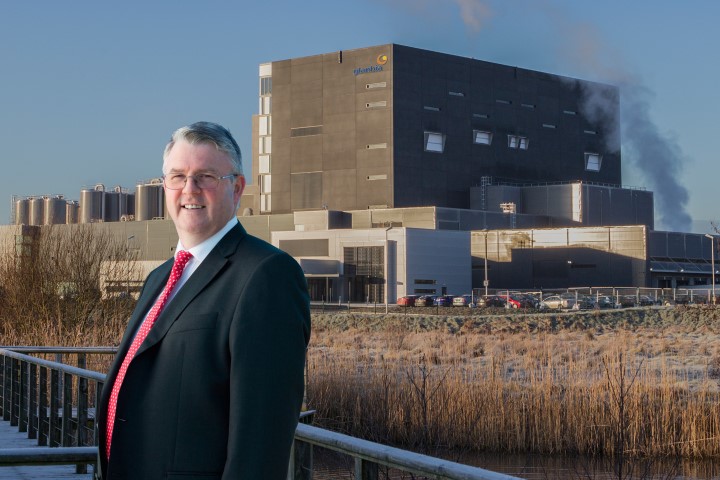 During the year GII completed the construction of a new dairy nutrition plant in Belview, Co. Kilkenny, Ireland to produce a range of value added ingredients. This plant processed over 300m litres of milk in 2015 and has additional available capacity to support the growth ambitions of the business and its supply base.

GII also recently announced plans for the expansion of cheddar cheese capacity at its plant in Wexford, Ireland at a cost of €35m. This facility is expected to be commissioned in 2017.

Performance in SWC was broadly in line with prior year. Raw material price reductions and improved ingredient yields offset a significant reduction in price as a result of US cheese market price declines. Cheese volumes were flat as the plant continued to operate at close to full capacity throughout the year.

In Q3 2015 Glanbia announced it was in advanced discussions with its SWC joint venture partner to expand cheese and whey production capacity by 25% at its plant in New Mexico, US. It is expected that the total project cost of approximately $140 million will be independently financed by SWC. The project is expected to be commissioned by 2018.

Glanbia Cheese performance declined marginally year on year due to a significant reduction in European mozzarella prices. While production volumes increased as a result of good underlying demand in the sector this was not enough to offset the decline in pricing.