The International Farm Comparison Network (IFCN) has published the top 20 global dairies based on milk intake in 2013 and Irish big player has been named among the major players.

Coming in at number 12 on the list Glanbia with a market share of 0.8% of global production is now classified as bigger than well known dairy players such as Muller in Germany and Yili in China. With 5,202 employed people across a total of 32 countries worldwide, Glanbia is now truly global organisation.

DairyCo analysis of the IFCN findings show that co-operatives Dairy Farmers of America and Fonterra topped the list, collecting 3.7% and 2.9% of global milk production respectively. European processors including Arla Foods follow, with all of them reported to have increased output by more than 40% since 2007.

It also says milk collected by processors in China and India also grew. The Chinese Government has a target of almost doubling milk production from the current 36 million tonnes to 64 million tonnes by 2020, while India is also looking to grow and improve its dairy sector with its industry-led Dairy Vision 2030 plan. Although processors in these key emerging countries are growing, the IFCN states that global demand for dairy will continue support opportunities for production and processing. 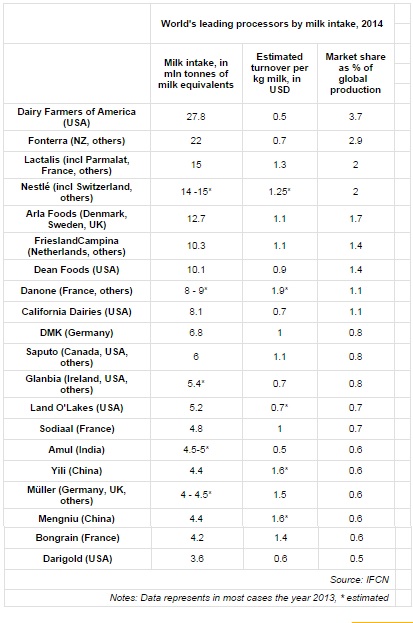