Getting down to the nuts and bolts 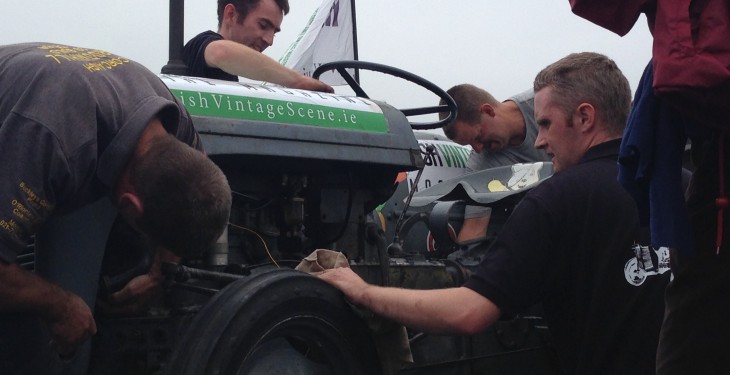 AgriLand takes a look at the competitive and heart-aching event that is the Live Tractor Build at this year’s National Ploughing Championships.

Up to six teams compete in the Irish Tractor Build, which is hosted by Irish Vintage Scene and has seen a notable growth in interest over the past number of years.

The concept originally came from the UK but according to Tom Heavey founder of the Irish Vintage Scene has been really and truly embraced in Ireland.

This year teams from Cavan, Galway, Donegal and Sligo will take part through the three-day event.

Irish Vintage Scene has attended the ploughing since 2007 and finds in fantastic for growing members and igniting more interest from the general public.

Ploughing attendees surround the Tractor Build arena eager to catch a glimpse of the action. The tractor is a Ferguson 20 Tractor, used mainly for its straightforwardness and also to ensure each team is presented with the same challenge. “Years ago we would have three tractors being assembled at one time, it was great for getting the crowd going but there was  a little controversy between the teams so now we keep it to the same one” said Heavey.

Interestingly it is not just a case of toys for big boys, this year a ladies team from Cavan will participate tomorrow and in previous years there was a women’s tractor build league. The women’s team are given a 20 minute head start and a man will help lift the gear box and wheels but aside from that the competition fair game for either sex.

The Ballinasloe 20 Build Team comprises of four tractor enthusiasts who team mate Niall claims was started 10 years ago for ‘the craic’.

However although there is serious fun to be had, evident from the good natured shouts and roars let out by the crowd, the team train  for two hours in three to four nights a week coming up to the event. At a glance the assembly platform appears to be a medley of bolts, wheels, oil and muscle.

According to Niall, what might seem like mass confusion is about precision and timing. “It’s all about communication and everyone knowing what their role is and when the other will need a bit of a hand.”

Once assembled a judge comes out to inspect the machine, which must start up and lift successfully in order to be in the running. Points are dropped for loose nuts and the Ballinalsoe 20 Build Team secures a time of eight minutes and 20 seconds putting them in first place with a Cork team due to best this later in the day.

A slide show of all the action