GDT price falls ‘driven by sentiment rather than fundamentals’

In its analysis of yesterday’s GDT auction, where overall dairy prices slid 9.3%, it said adding in the fall from the July auctions, overall prices have fallen a combined 23.8% since June.

Key WMP prices have fallen over 30%.

“We think these falls are sentiment-driven and thus are likely to be in part temporary,” according to ASB Rural Economist Nathan Penny. 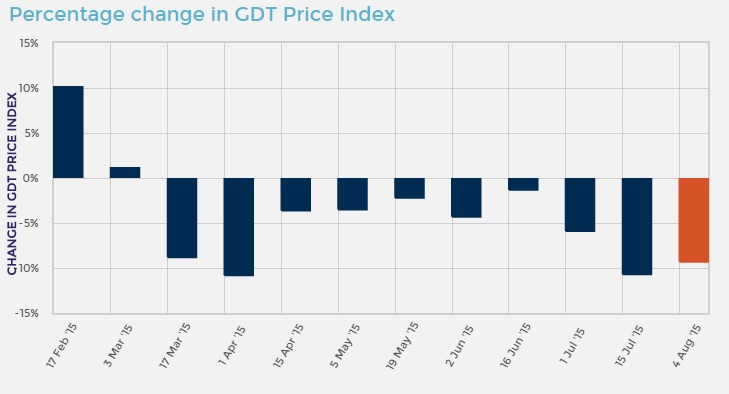 He said over the past month or so, dairy supply has not changed materially – to the contrary, he said, supply has actually tightened gradually and the risks are that it tightens further.

“Sure the risks are that demand is weaker, particularly in the key dairy market China as officials there struggle to stabilise the Chinese sharemarket and boost economic growth.

“Also, demand from the Middle East may be weak on low oil prices,” he said.

However, Penny says the market has largely shrugged off supply developments and risks.

“The magnitude of the recent price falls don’t, in our view, reflect the balance of these demand and supply risks.

“First up, Fonterra’s move to switch production away from WMP into higher-priced products over the next 12 months plus a lower production outlook should together put upward pressure on overall prices in time. The 12-month forecast of WMP auction volumes, for example, has been lowered by around 9%.

“Secondly, risks are rising of an el niño weather pattern developing and causing drought in eastern parts of New Zealand, he said.

Penny says this is on top of our expectation that farmers respond to this season’s low milk price with less production.

For example, he said the bank expects New Zealand production this season to be only on par with last season, if not fall.

Call on DAFM to engage with farmers on Nitrates Action Plan