Members of An Garda Síochána discovered stolen vehicles and a “chop shop” this week in a village in Co. Meath, resulting in three arrests.

A “chop shop” is a place where stolen vehicles are stripped of saleable parts.

In a statement this morning (Wednesday, January 20), a spokesperson for An Garda Síochána explained:

“Gardaí have arrested three men following the search of a scrapyard in Crossakiel, Co. Meath which resulted in the discovery of two stolen vehicles, on [Tuesday] January 19, 2021.

“The Stolen Motor Vehicle Investigation Unit attended and assisted scenes of Crime Unit Meath with an examination of the scene and motor vehicle parts present at the site.

“Three men were arrested and conveyed to Kells Garda Station where they were detained under Section 4 of the Criminal Justice Act 1984.

“The three men have been charged and are scheduled to appear before Trim District Court this morning,” the Garda statement concluded.

On a related note, a Massey Ferguson 185 tractor and a McHale bale splitter which had been stolen from a farm in Co. Cavan overnight on Friday (January 15) have been recovered in recent days, according to their owners.

The machinery was taken from a farm in the Bailieboro area of the county. 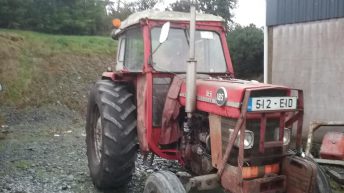