Dairy products prices could fall again at tomorrow’s Global Dairy Trade auction with futures markets signalling a fall of 5% could be on the cards.

Whole Milk Powder futures contracts traded on New Zealand’s NZX at $US2550 a tonne, lower than the $US2740 a tonne paid at the October 20 Global Dairy Trade auction.

Futures contracts into December and the new year are also now trading at a discount on recent Global Dairy Trade results.

On the back of the performance of the futures market, New Zealand bank ASB is expecting that tomorrow’s auction could fall by 5%.

Dairy ftrs point to 2nd scale back in prices at this wk’s auction. We expect WMP down ca. 5% #dairyturningcorner ^NP pic.twitter.com/d4BH1oud4h

Overall dairy prices fell 3.1% at the last Global Dairy Trade auction on October 20, following a combined lift of 63% over the four previous auctions (WMP was up over 80%).

According to Nathan Penny, Rural Economist with ASB bank in New Zealand, the fall was in contrast to its expectation for a small increase within the 0% to 5% range.

At the auction, both WMP and SMP prices posted slightly larger falls, dipping 4.6% and 4.5% respectively. 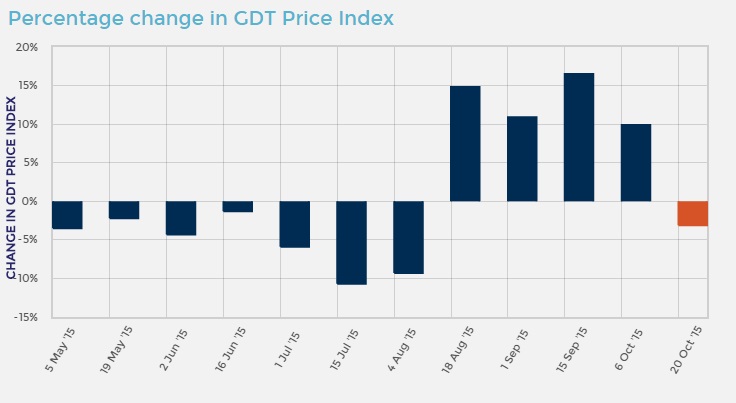 “We interpret this fall as markets taking the opportunity to take stock of the recent surge in prices. Since the last auction there has been nothing to suggest that prices should fall,” he said.

In fact, he said weak Fonterra production data if anything confirmed that New Zealand production is indeed in decline.

He said with that in mind, he expects the pause in price lifts to signal a more gradual pace of price rises over the remainder of the season.