A mixture of fog, rain and sunny spells for the week – Met Eireann

There will be a mixture of fog, rain and sunny spells for the week ahead, according to Met Eireann.

Today (Monday) will be dull and misty in many places, with some fog, especially so in parts of Ulster and Leinster, it said.

According to Met Eireann, the mist, fog and low cloud will lift slowly, but some may linger into the afternoon in northern areas.

Once the mist and fog lifts, some good sunny spells will develop and Met Eireann has said there will be top temperatures 13 to 16 degrees Celsius.

Tonight (Monday) will be dry with some clear spells but with murky conditions too, with patches of mist, fog and low cloud returning once again, it said.

There will be lowest temperatures tonight (Monday) of 6 to 9 degrees, under cloud and fog, but down to 3 or 4 degrees, where skies hold clear.

Tomorrow (Tuesday) will have another largely dull and misty start with fog in places, it said. In places where the fog, mist and low cloud lifts, Met Eireann has said that some sunny spells will develop.

There will be top temperatures of 11 to 15 degrees on Tuesday, it said.

On Tuesday night the rain in eastern areas will extend further inland and north but most of Connacht, Munster and the west of Ulster will stay largely dry, according to Met Eireann.

Temperatures will fall to between 7 and 9 degrees and winds will be light easterly or variable, falling calm in places inland and further west there could be some patches of mist, it said.

Met Eireann has said that Wednesday will start dull and damp in eastern areas, but lingering rain will clear during the morning or early afternoon there.

Elsewhere will be dry with bright or sunny spells and mainly light southerly or variable breezes, it said. 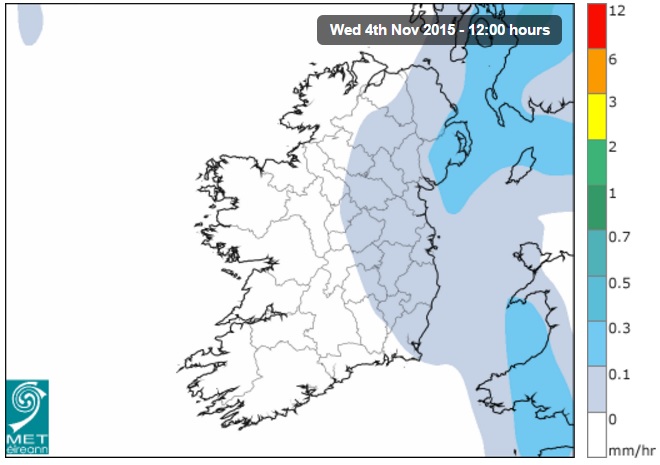 The current indication from Met Eireann for rainfall levels on Wednesday

Met Eireann has said that temperatures will be a little down on recently but still relatively mild for the time of year between 10 and 14 degrees.

At night temperatures will fall to between 4 and 6 in the north but will linger between 7 and 10 further south and it’ll be dry overnight, it said.

Looking to Thursday, Met Eireann has said that a southerly wind will pick up and cloudier conditions overall will bring outbreaks of rain to many areas.

The rain will be patchy but likely to continue through the evening and then break up later for a mostly dry night, it said.

According to Met Eireann, there’ll be rain in the west of the country on Friday, mainly along the west coast where it could turn heavy at times, but further east should remain dry.

Current indications suggest that the weather will remain unsettled but relatively mild for the time of year for the start of the weekend, although a spell of wet and windy weather is possible for Saturday, it said.