From the board room to the cheese board 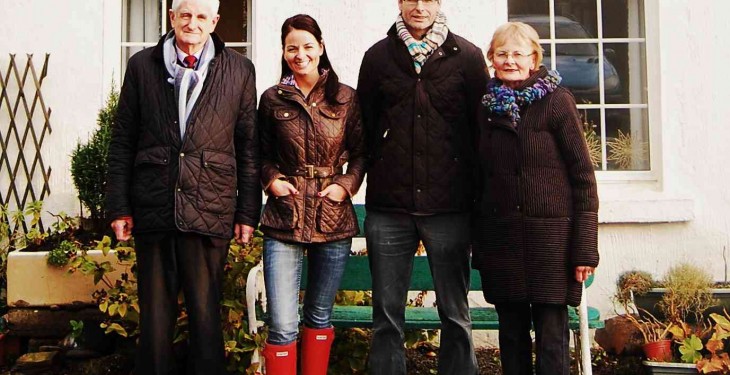 Situated in Newcastle West, County Limerick since the 1970s, Cahill’s Farm Cheese was founded on the Cahill’s family love of all things dairy.

While we are now accustomed to hearing Dragon’s Den and Apprentice mentors hammering on about business plans, strategy and sales the move from dairy to cheese production was a more relaxed affair for the Cahill’s.

Helen elaborated: “My family have been farming in Newcastle West since 1902 so you could say that dairy is in our blood. My dad studied Dairy Science in University College Cork in the 1950s and my mother was, and still is, a great domestic scientist. There was no business plan, as such; they simply started cheese making and selling that cheese locally. The business grew slowly and modestly and in the mid 1980s, they began to specialise in producing flavoured cheddars.”

In 2006 their son Dan took over the running of the business and a purpose-built plant was erected beside the family home. Helen is a more recent recruit to the family business having made an unusual career move. “I practiced as a solicitor for a number of years until returning home to a life of cheese! We have a great team of 12, dedicated, hard-working and employees. We are a small but efficient bunch,” explained Helen.

Competing in a market alongside big players Cahill’s has asserted itself as a high-quality brand catering for everyone’s taste and wallet. At present there are seven flavoured cheddars in the range with Ballintubber Cheddar and Chives a best seller in the domestic market.

Helen detailed the company’s presence in the Irish market: “At home in Ireland, we are greatly supported by the multiples as well as many small independent retailers. Cahill’s Farm Cheese is available in Dunnes Stores and Superquinn Stores. We make three cheeses for the Cheeses of Ireland Range for Tesco and we make private label cheeses for both Lidl’s Deluxe Range and Aldi’s Ardagh Range.”

Last year, Cahill’s Farm Cheese exported product to 12 countries and this was aided by support from Enterprise Ireland and Bord Bia. The Original Irish Porter Cheese and the Original Irish Whiskey Cheese have proved popular flavours abroad and Helen feels that Ireland’s reputation and the Cahill’s commitment to its cattle have helped increase the brand’s reach.

“The export market accounts for approximately 60 per cent of our overall business. The US is our biggest customer but we are slowly growing other markets also. The reputation of Ireland as a destination for high-quality agricultural produce is certainly increasing, which makes our job a lot easier. The taste of Irish cheddar is rich and creamy when compared to cheddar produced elsewhere. When you consider the duration of the year that our cows spend outside, eating grass, then it is no wonder that Irish milk is so rich and flavoursome,” she said.

While it appears the sky is the limit for Cahill’s the company remains acutely aware of the changeable economic climate.

Helen explained: “We are continuously challenged by an ever-changing, competitive marketplace. However, we remain confident in the quality and sustainability of our brand. There are lots of external factors that affect the business. The rising milk prices, the Recession, to name but two. However, while people have less expendable income, Irish people are still interested in quality.”

In addition to economic instability the Cahill’s have also had to adapt to new ways of marketing its product. Social media, whilst time consuming, is a budget friendly tool for tech-saavy companies.

Cahill’s have a Facebook page and Twitter account that Helen and her brother Dan manage. The personal element is an aspect that especially appeals to Cahill’s.

“The accessibility and instantaneous connection to customers, buyers, shop owners, chefs and people simply interested in good food is really fantastic. Through Twitter, you have your finger on the pulse and know what’s happening in the industry, literally as it happens. If milk production goes up in the US, we’ll know the very moment the figures are released. It is a learning tool as well as a means of communication and advertising,” commented Helen.

With domestic and export market showing significant enthusiasm for the Cahill’s Farm Cheese the company intends to keep on improving.  According to Helen “It is certainly important to remain fresh and new. We are working on a great smoked cheese: Cahill’s Ballinwood Smoked Cheddar. We are excited about launching a new addition to our range. Watch this space!”